Edit
watch 02:46
The Quarry - The Loop
Do you like this video?
Play Sound
"Relax, hotshot. I got something useful for ya': Banshees. These babies can blow the snot outta ground forces. Got cloaking too. Gotta love that!"

The AH/G-24 Banshee Tactical-Strike Aircraft[1] is a terran air unit in StarCraft II.

"Similar to the Siege Tank in its ability to make quick work of ground troops, the Banshee is an aerial harbinger of destruction. Agile twin turbofans accompany cloaking technologies and powerful backlash rockets, making the Banshee our military’s most capable hit-and-run option when the situation demands nothing less."

"'Quiet' = 'Will only slightly rupture your eardrums.'"

- A Dominion marine on the Banshee's rotors(src)

The Banshee is powered by relatively low-thrust and inexpensive[2] VTOL[3] turbofans capable of operating only in an atmosphere[2], coupled with a fantail rotor assembly for steering and banking[4]. The turbofans are sturdy, simple in design, and relatively easy to maintain. They allow for indefinite loitering with minimal noise, which is perfect for stealth operations[3]. The fans allow the Banshee to be dropped from orbit[5], but are incapable of attaining escape velocity[2]. However, Banshees are outfitted with special propulsion systems only used in space[6]. The Dominion Special Forces make use of a Banshee variant with upgraded twin VTOL turbofans as well as a new rear vertical stabilizer, ensuring superior stability and performance.[7]

The Banshee's cockpit is fully pressurized, and an oxygen generator is integrated into the ship's design—both were integrated after the ship's initial deployment. These features allow for quick orbital deployments to more efficiently support troops on the ground, and to strike at targets of opportunity.[3]

"Overall, the design is economical and easy to maintain. Its one drawback: no anti-air capability."
"That's why God invented marines. To shoot down all the crap you can't."

The Banshee was designed to be both economical and effective. Built specifically to provide air support for frontline infantry, they are ideal aircraft for tactical strikes. Banshee pilots are outfitted with RS fusion suits.[7]

The Banshee is heavily optimized for its intended role. Its standard armament is air-to-ground Backlash rockets[2]. Additional armament options were also developed. Kel-Morian Banshees were armed with rapid-firing projectile weaponry capable of striking aerial targets[8]. By the Second Great War, Banshees could carry the Shockwave missile battery, which bombard a longer linear area ahead of the aircraft, rather than just a smaller circular point as with the default Backlashes.[9]

The Banshee received cloaking devices after entering service with militias and guerilla forces. Salvaged cloaking devices from Wraiths allow the Banshee to become an effective raider,[2] and the Dominion's "stealth darling"[3]. This DN51 cloak generator features higher uptime, tighter field cohesion, and more significant light refraction than any previous terran cloaking system[4]. By the Second Great War, the Dominion Armed Forces were equipping their Banshees with the DN51 cloak generator; at the time, the DN51 was such a sophisticated example of Dominion technology that special teams were deployed to recover them from crashed aircraft[1]. Mercenaries made use of heavily modified Banshees that used a variety of cobbled together parts, some using bulldozer parts in their armor design. Banshees were utilized by planetary defense forces such as the Knights of Tyrador, and served with distinction against Cerberus Program ultralisks in the Battle of Tyrador IX.[7]

By the Defenders of Man Insurgency, the Umojan Protectorate appeared to be fielding Banshees, and some were infested by the zerg on Jarban Minor.[10]

The Banshee was designed by Procyon Industries to meet requirements from the Terran Dominion for a dedicated ground attack aircraft[11] for counter-insurgency operations[1]. The Banshee was an entirely new design; adapting an existing design was unlikely to be satisfactory[2]. After much experimentation[11], the Banshee was in use by the Dominion by 2502[12][13], and within the same year, the Kel-Morian Combine[8]. It has proven very successful in service.[2]

Initial deployment within the Dominion was disappointing. The aircraft was judged as too inflexible, and many were relegated to minor roles with backwater militias. Over time, ease of interstellar deployment, the ability to deliver strikes over difficult terrain, and the addition of the cloaking device, led to more widespread deployment within the Dominion. The Banshee gained a reputation as a Dominion terror weapon due to collateral damage caused in urban combat[2] (a result of the craft's poor guidance systems for its backlash rockets)[3]. Guerilla and resistance forces also found the Banshee useful against the Dominion[2]. Banshees are used as light-infantry support[11], and can operate with Vikings as air cavalry.[14]

Despite its original purpose as a counter-insurgency weapon, the Banshee went on to be used against protoss, zerg, and terran front line forces[1]. Little can be done to alter the public's negative perception of the Dominion, but it has nonetheless gained a permanent place in its airforce due to its low cost and easy maintenance.[3]

Raynor's Raiders gained access to the craft during the Second Great War[15]. Through a series of backdoor deals, the Umojan Protectorate was able to acquire a limited number of Banshees from Procyon Industries, although the company maintained they were stolen[7]. Banshees were also in use by the time of the Defenders of Man Insurgency, with Nova's Covert Ops Crew deploying advanced "Covert Banshees" in combat.[16]

After the End War, Dominion engineers have made critical upgrades to the banshee's twin VTOL turbofans, enabling superior stability and performance when paired with the new vertical stabilizer in the rear of the craft.[7]

Length Range: 2 behind a target (deal 100% damage per range 0.5) (with Shockwave Missile Battery)

Banshees can quickly destroy buildings, even powering through anti-air defenses, and are strong against heavy armored ground units like the siege tank, ultralisk, and colossus. Other races should deploy specialized anti-air units such as corruptors, mutalisks, void rays and phoenixes to keep them in check[17]. Ground unit counters include marines, thors, cyclones, hydralisks, stalkers equipped with blink, and high templar psionic storms.[18]

In the Wings of Liberty single-player campaign, Banshees can be upgraded to fire their missiles in a straight line, doing splash damage to units in a line similar to the hellion or lurker. They can also be upgraded to consume half of the energy while cloaked, letting the Banshee remain cloaked longer.

Banshees bank on turns like some other air units.[19]

Banshees are unlocked by playing the mission "Supernova."[15] Their cloaking ability is automatically researched.

The Shockwave Missile Battery fires multiple missiles in a straight line with each shot allowing the Banshee to hit multiple ground targets. This upgrade is useful when fighting ground targets that are packed close together.

Doubles the amount of time Banshees can stay cloaked.

Wolfe Industries offers a new model of Banshee that embeds light-dampening materials into the hull. This new hull material requires far less energy to conceal and makes it much easier for the Banshee to maintain cloak once initiated.[9]

Armor upgrades increase health of affected units by 5% per level.[20]

Damaged mechanical units recover hit points when out of combat, at a rate of 0.6015 each second.[21]

Banshees are available to Raynor in Co-op Missions. Raynor can also call down the Dusk Wings as a temporary calldown with his Banshee Airstrike ability.

Banshees are available to Nova starting on mission "Trouble in Paradise". Infested banshees are encountered in the mission "Night Terrors".

The banshee no longer needs energy to maintain cloaking.

In the game engine as early as 2006[22], the Banshee was one of the first terran units conceived for StarCraft II, replacing the Wraith[23]. It was made to be both similar and different to the Wraith, the key difference being the nature of their attack. As many cloak detector units are aerial, this would prevent the Banshee from attacking the units which presented the greatest threat to it. As such, the Banshee fulfills the role of a base raider of a "combined-arms" terran force[24]. Visually, it hardly diverged from its original conception.[23]

StarCraft II beta patch 2 removed the fusion core requirement for researching Cloak. Patch 7 increased the banshee's HP from 130 to 140. The Patch 2.0.9 Balance Update in Heart of the Swarm reduced the research cost of Cloak from 200 minerals and gas to 100. Legacy of the Void added the Hyperflight Rotors upgrade. Patch 3.8 removed the fusion core requirement and increased the upgrade time from 93 seconds to 121. Patch 4.7.1 decreased the cost from 200 minerals and gas to 150.

Banshees can be summoned by Jim Raynor in Heroes of the Storm.[32] 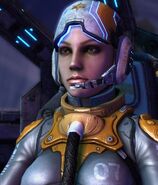