A Zerg, A Shotgun and You (also titled Shotgun, Zerg, and You) is a song in Wings of Liberty.

It is composed by Anthony Theisen, James Page, and John Denton and performed by White Boy James & The Blues Express.[1]

Shotgun, A Zerg and You was a popular terran musical track performed by White Boy James & The Blues Express, written by the notorious outlaw-poet James "White Boy" Page. It was a followup to their previous hit Excuse Me for Scribblin'. The song was later banned by the Terran Dominion. The song was part of "Revolution Overdrive: Songs of Liberty," compiling the greatest anti-Dominion songs of the Koprulu sector.[2] 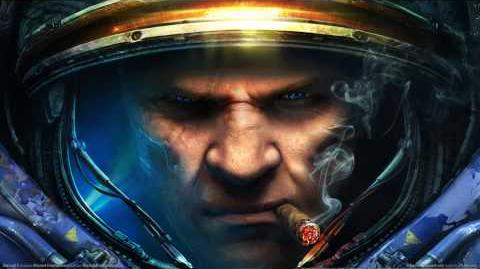 It can be played on the jukebox in the cantina.

Retrieved from "https://starcraft.fandom.com/wiki/A_Zerg,_A_Shotgun_and_You?oldid=379026"
Community content is available under CC-BY-SA unless otherwise noted.