The unit was voiced by Jason Hayes.

Archons can attack both ground and air units and its attack causes minor splash damage (50% within 15 pixels, 25% within 16-30 pixels).[1] Attacking groups of enemy air units greatly increases the efficiency of archons.

An archon has most of its "health" invested in its shields. This means that they take full damage from all attack types and are vulnerable to terrans who have the science vessel's EMP Shockwave. With such a reliance on shields, shield upgrades at the Forge as well as shield batteries are a great boon for heavy archon use.

Archon have quite specific properties in the game mechanics. They are neither biological nor mechanical and are therefore immune to a number of abilities, such as Lockdown, Spawn Broodlings, and Irradiate. They also count as hovering and do not trigger spider mines. Their attack is actually short ranged, and not melee. Archon attacks and splash damage bypass the defiler's Dark Swarm.[2]

Archons can be countered by siege tanks in siege mode and mass ultralisks.

Archons become available to the player in the campaign with the mission "The Hunt for Tassadar" in Episode III and "Dunes of Shakuras" in Episode IV.

Two high templar can sacrifice themselves, transforming into an archon.

Unsurprisingly archons are expensive, especially in gas. Each effectively costs 100 minerals, 300 gas, and 4 psi, the combined price of the two sacrificed high templar. The cost necessarily limits the number of archons that can be used, ensuring that lesser units like zealots remain a vital part of protoss strategy.

During the StarCraft Alpha, three or more high templar were required in order to form an archon.[3][4] 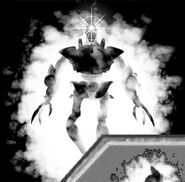