Edit
watch 02:46
The Quarry - The Loop
Do you like this video?
Play Sound
"Well, well. I never understood what the commander saw in you. Still, I must admit, you've proven to be quite resilient - even with the Terrazine in your veins slowly killing you. Of course, all you have to do to save yourself... is get through me."

Artemis was a terran spectre, who worked for Jackson Hauler and followed him very closely.

Artemis first fought Nova on Aiur, but Nova managed to ward her away. Later she fought Nova on Gehenna Station, to stop her from entering the decontamination chambers and purging the terrazine from her system. Nova defeated Artemis, and used the chamber before the terrazine killed her.[1]

Artemis appears in the demo build game files for StarCraft: Ghost. Her gear is taken from the concept art for a a "spectre cloaker." According to her text file, she worked for Jackson Hauler. She was to serve as a boss twice in the game, once after infiltrating a protoss base, and once before the final confrontation with Hauler.[1] 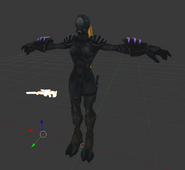