Avernus Station is a space station situated in or near the Koprulu Sector.

The station was built on mineral and vespene gas deposits. By the Brood War, some deposits were depleted.[1]

During the Second Great War, Gabriel Tosh, an anti-Dominion spectre, sought to establish a spectre training facility on the station. It used jorium and terrazine stocks and a psionic waveform indoctrinator.[2]

Plot branch : Raynor's Raiders side with Nova against Tosh (B canon)

Main article: Ghost of a Chance

The spectre training facility was destroyed by Nova Terra and Raynor's Raiders.[2] Tosh escaped the raid but was assassinated shortly afterwards by Nova.[3]

The station originally shared the same design as Erebus Station.[4] With the release of the board game however, it was given its own design.

It may be named after the Avernus crater, the ancient name for the crater containing Lake Avernus in Italy. 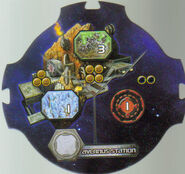 The original Avernus Station design
Add a photo to this gallery

Retrieved from "https://starcraft.fandom.com/wiki/Avernus_Station?oldid=180797"
Community content is available under CC-BY-SA unless otherwise noted.