Edit
watch 02:56
Raise a Floppa - The Loop
Do you like this video?
Play Sound
"Those things are pretty nasty. Next time, you should try not to let them splash you!"

The baneling is an explosive zerg strain, evolved from the zergling. It is a suicide bomber unit.

"Nothing wakes you up like seeing a pack of these tucking and rolling toward you."

- A Dominion marine on banelings(src)

Banelings are created from zerglings following a brief chrysalis phase. In the new form, the zergling's claws shrivel and become withered, and a swollen sac filled with volatile chemicals grows out of its back.[1] The zergling's skin is repurposed, stretching over newly formed growths while its bone plates soften to hold bulbous, pulsating acid sacs in place. Though the remains of the carapace offer no real protection, they allow for unhindered delivery of the baneling's payload. The digestive and reproductory tracts are assimilated as nutrients to accelerate the process, and make room for the fleshy, mutated adrenal glands. These are re-purposed to produce and store large quantities of highly corrosive acid.[2] Few materials can withstand this acid burst.[3]

Because of its mass, the baneling's legs are thicker than the zergling's. In order to stabilize itself. Its feet are replaced by sharp spikes that allow them to navigate rough terrain, albeit at a slower pace. The Swarm was able to increase the baneling's speed despite these imperfections. Yet due to their bloated nature, banelings are barely able to walk. They have been observed to tuck into a ball and roll. Banelings also possess a rudimentary sonar system—Dominion scientists have theorized that this is a degeneration of the zergling's complex optical structure. This system consists of a transmitter in the center of the baneling's skull, along with two evenly spaced receivers to the sides. The transmitter emits pulses that map the baneling's surrounding area, and echoes back to the receiver, feeding the baneling with a continuous stream of spatial information.[2] Baneling anatomy contains lungs and a heart.[4]

Leviathan Brood banelings retain the spine-like growths of the zerglings that metamorphosed into them.[3]

As all Soronan mold proteins exist in banelings, they are capable of surviving on minimal oxygen and moisture.[2] Terran scientists theorize the triggering enzyme for the baneling's ability to detonate was adapted from those of early infested terrans.[5]

When a baneling gets close enough to an enemy, it triggers a reaction within its volatile chemical payload, causing the creature to explode with a shower of searing acid. The explosion destroys the baneling but also inflicts terrible damage to its enemies,[2] highly effective against both structures and ground forces. In fact, a clutch of them is capable of wiping out a group of vehicles and infantry in the blink of an eye. The banelings' lethality is further enhanced by the zerg predilection for burrowing. An apparently safe area can soon turn into a deathtrap as these monstrosities erupt beneath their foes, giving enemies virtually no time to react.[1] By 2511, the Terran Dominion had developed a neutralizing spray for their vehicles that could stop the corrosion from baneling acid.[4]

Banelings were first observed during the Siege of Cask on Sorona, in 2503.[6] Its defenders held out against the zerg long enough so that it came to pass that only minor breeds such as zerglings continued to be spawned to be sent into battle.[7] However, queens drove the development of a new strain,[1] via zerglings incorporating an acidic native mold into themselves.[7] These new banelings were thus sent against Cask, their spray of acid destroying its defenses and eradicating the terrans present.[7]

During the same year,[8] when other terrans encountered the baneling for the first time they thought it was a mutation of a previously unknown genus rather than a morph of the zergling. The baneling was duly added to the list of threats and scientists began an effort to develop chemical rounds to detonate banelings prematurely.[1]

In 2505, Abathur used the baneling strain as a base for a mutation upgrade to the mutalisk, allowing its glaive wurms to explode on impact.[9] After joining Kerrigan, Dehaka would selectively breed his pack to create similar strains of creatures among the primal zerg.

Baneling acid sacs were harvested for use in Project Simulant in the project's attempt to recreate the baneling in robotic form. The engineers had to deal with the sacs constantly melting through the surrounding plate infrastructure. Eventually they made it work. Controlled banelings with replaced nervous systems were utilized by the Cerberus Program, in spite of the significant cost to do so for a suicidal creature.[3]

30 (+5 health with Centrifugal Hooks in Versus)

150
Banelings are relatively small units that slowly move around the battlefield and kill opponents with a low-damage suicide attack.

Banelings do not roll[10] unless they have their speed upgrade.[11]

It is strong against marines, zealots, and zerglings, and weak against thors, stalkers, and roaches. Siege tanks are also very effective against banelings while in Siege Mode. High templar with psi storm can also obliterate tightly packed baneling groups, while the sentry can use Force Field to prevent the banelings from getting into melee range. Banelings are also useful when facing massed light units such as hydralisks.

Banelings are strong against melee units[12] and weak buildings such as bunkers, supply depots, and photon cannons[13] but are weak against ranged weapons due to their low hit points.[14] They are designed to counter zealots, zerglings, and un-upgraded marines.[15][16]

Groups of banelings do not attack individual targets with overkill, they will only detonate as many of themselves as needed to destroy one target before moving on to the next (or waiting for new orders). When assaulting multiple targets banelings can transition from a just-slain target to a still living one in a fraction of a second.

If a baneling is killed, it explodes, dealing splash damage around it. Unlike other units, banelings do not increase a unit's kill counter.

A burrowed baneling can have unburrow set to autocast, giving it an attack ability similar to that of a spider mine.

Banelings are a powerful economy-raiding force; by using overlords to transport them into an enemy base, they can quickly devastate the workers. However, a planetary fortress is well suited to destroy the banelings.[14] Use of raiding is recommended even until late game.[23]

Banelings should be mixed with zerglings when facing ranged opponents because they become difficult to focus fire; even one baneling escaping the fire can destroy a mass of ranged units.[24]

Banelings have low hit points so are best used in ambushes.[25] They can burrow, attacking like mines,[24] but can also attack from other hidden areas, such as behind trees, to accomplish the ambush.[25]

Banelings are very useful against marines and zealots, even into the late game,[23] and generally dominate units such as zerglings in combat, but zerglings can come out ahead with micro.[26] Banelings can be defeated by marines equipped with stimpacks or defended by marauders.[27]

As they do splash damage, banelings are effective against cloaked units. For instance, a group of dark templar attacking a hatchery can be eliminated by banelings that target the hatchery itself,[28] or by commanding the baneling to explode on the spot.[29]

A baneling/roach combo can be very powerful against terrans. The roaches will soak incoming damage, making it easier for the banelings to reach their targets.[30]

Banelings can be ordered to detonate, instantly dealing damage around them, even if burrowed. The ability is not smartcast.

In the campaign of Heart of the Swarm, banelings are unlocked upon playing the mission "Domination." Banelings may be evolved into either splitters or hunters after completing the required evolution mission. At Level 20, Kerrigan can use a Spawn Banelings ability to instantly create 6 banelings.

Banelings are used by Zagara in Co-op Missions. In addition to normal production from zerglings, Zagara can upgrade baneling nests to periodically spawn banelings over time.

Mecha banelings are used by Stetmann. These banelings have an energy barrier allowing them to survive longer until contact with their enemy.

Suicide unit. Deals damage over a small area upon death. Splits into smaller units as it dies.

Banelings can be spawned by Zagara in Heroes of the Storm.[31] They also replace Tychus's Shredder Grenades in his Infested Tychus skin.[32]

Banelings can be spawned on the map Braxis Holdout, and are part of the zerg attack waves that are sent against opponents.[32]

"There ain’t no party like my baneling’s tea party! Hey! Ho!"

Baneling variants in in Heart of the Swarm: hunter variant (left) and splitter variant (right) 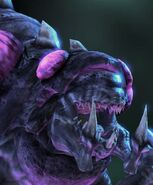