"Although it may take some time to get into action, once operational, the Battlecruiser is simply unmatched by any opposing unit – whether it be Protoss, Terran, or Zerg. Between its high-intensity barrage of lasers and its cataclysmic Yamato Cannon, the Battlecruiser is equipped enough to destroy any unfortunate target it might set its sights upon."

4 engines (most, if not all classes)

The battlecruiser is a type of terran capital ship employed in the Koprulu sector.

"Who called in the fleet? We did!"

Battlecruisers stem as far back as the early days of the Terran Confederacy.[6] While there are many classes of battlecruisers, all are armed with lasers and protected by neosteel armor.[7] These laser weapons consist of multiple twin-cannon laser batteries for aerial defense and surface bombardment, located across the battlecruiser's hull. Its air-to-air guns—not as powerful as its air-to-ground ones—are equipped with advanced optics and sensors to deal with fast moving targets. The vessel's air-to-ground guns make use of electromagnetic coils to increase the potency of their shots.[8]

Battlecruisers were employed during the Guild Wars when space engagements were fought by capital ships and medium-sized gunships. The development of anti-capital ship starfighters, such as Wraiths, did not spell the end of battlecruisers. The large warships adapted to carry strike craft which augmented and complemented the combat value of both. Battlecruisers continue to be an integral part of terran space forces as general purpose warships[9] and command ships during extended campaigns.[10]

Gravity accelerators are also found on all battlecruisers.[11] Warp drives are also fixed on battlecruisers, allowing it to achieve FTL travel. Besides the standard set of safety features, some battlecruisers have a secondary, short range warp drive to reduce wear and tear on the main one. It also serves as backup in emergency situations, such as the need to effect a blind jump, which is a very risky endeavor, to retreat from a hot zone. The shorter range reduces the likelihood that vessel and crew will end up stranded for years in a remote location.[8] When operating in atmospheric conditions, battlecruisers are kept aloft through antigravity technology.[12]

Battlecruisers are not unlike self-contained cities, and house crews ranging in size from 4000 to 7000. Besides the standard facilities required by a warship, battlecruisers boast an assortment of cantinas and rec rooms.[8]

Battlecruisers use force fields for protection, but because they consume vast amounts of energy, these are only used when a battlecruiser is vulnerable, such as leaving warp space or entering an atmosphere. Otherwise the battlecruiser relies on its heavy armor for protection.[13] In the case of an emergency, battlecruisers are outfitted with jump-pods, allowing the crew to abandon the ship and survive in deep space for days at a time.[4]

Battlecruisers are sometimes referred to as "battleships."[3]

After the Brood War, battlecruiser research was done through fusion cores, which harassed nuclear energy and antimatter to improve on their design.[12]

The Leviathan-class was uncommon at the start of the 26th century, having largely been supplanted by the Behemoth-class. The Leviathan could travel in warp space. Auxiliary craft docked at hydraulic ports. The ports were perilously close to the bridge, making the class vulnerable to enemy boarding actions.[14]

"Only the finest officers are chosen to serve aboard the pride of the Confederate fleet-- do you have what it takes?"

The Behemoth-class was the most common type during the Great War, representing a noticeable improvement over the Leviathan. It can travel through warp space,[9] operate within atmospheres and land on planetary surfaces.[15] Hyperion, a souped-up Behemoth, can make warp jumps from within planetary atmospheres.[16] Second Great War-era Behemoths had crews of 6000.[3]

The class is armed with burst laser batteries[16] and nuclear warheads.[17] Older ships did not have side firing arcs for the laser batteries.[11] The batteries were also vulnerable to interceptors.[18] Some warheads were reserved for orbital bombardment rather than for space combat,[15] though some Behemoths were armed ten-kiloton tactical warheads designed for both ship-to-ship combat and ground bombardment.[19] The Yamato cannon entered service aboard the Behemoth just before the Great War.[1] Battlecruisers received the Colossus reactor to better meet the cannon's enormous energy requirements.[10]

Brood War-era Terran Dominion Behemoths required access to physics labs to power up their weapon systems. The loss of these labs could cripple a fleet.[20]

The Behemoth-class is protected by standard neosteel armor[10] and energy shields,[11][9] It is less vulnerable to enemy boarding actions.[21] A hit from a Yamato cannon can cripple a Behemoth.[3] Behemoths are powered by fusion reactors, but these are regarded as outdated when compared to the fusion technology utilized by the Minotaur-class. Efforts are being made to retrofit old vessels. To this day, many battlecruisers belonging to the old ex-Confederate guard still use antiquated reactors—poorly maintained or jury-rigged to yield higher energy outputs—that have a tendency to leak.[8] The bridges of Behemoths during the Brood War and before had a lower profile, with port and starboard view decks to ensure maximum visibility in the event of an attack such as a zerg ambush.[12]

The Behemoth includes force field-enclosed[22] docking bays.[23] A strike group can include Wraiths and scoutships.[9]

A Behemoth can carry hundreds[11] to thousands[9] of troops and their equipment.,[11] deployed by dropships and shuttles[9] carried in the docking bays,[24] along with up to two dozen starfighters.[9]

The Behemoth has proven be an enduring design and continued to serve into the Second Great War.[21][3] It received periodic upgrades and its hammerhead design inspired succeeding types.[7] Planetary defense forces such as the Knights of Tyrador continued to use Behemoths well into the reign of Valerian Mengsk.[12]

The Hercules-class entered service after the Brood War. The Hercules could be equipped with plasma torpedoes for saturation ground bombardment. Like the Yamato cannon, the plasma torpedo system also had a large energy requirement.[7]

Minotaurs can be upgraded with a variety of tactical systems. This includes the Type-V Yamato cannon,[30] energy shields,[31] anti-aerospace missile pods, and a defensive matrix.[18] By the End War, terran engineers had been able to devise new technology for the ship, allowing it to teleport across great distances.[32]

These battlecruisers have personnel quarters, a brig, a mess hall[28] and a bridge.[33] Their fusion reactors are cleaner and more efficient than the outdated reactors of the Behemoth-class. This includes the lack of leakage.[8]

In 2503,[34] Dominion Minotaurs were suddenly withdrawn to be refitted for interatmospheric combat at Korhal IV. The battlecruisers were ordered to abandon their current assignments, disembark passengers and cargo on nearby habitable worlds, and proceed immediately to the Dominion capital.[35]

"Bristling with laser batteries and thousands of glittering optic sensors, this flying neosteel citadel projects the Dominion's raw power and growing technical sophistication across the Koprulu sector like nothing else. Housing anywhere from 6,000 to 8,000 crewmembers, the Gorgon-class battlecruiser is the gleaming apex of terran military engineering."

The Gorgon-class battlecruiser is the most powerful warship ever fielded by the terrans of the Koprulu sector.[1] It is larger than the Behemoth-class.[3] The interior includes a bridge,[33] and extensive crew facilities which include cantinas and rec rooms. They are equipped with thousands of optic sensors, multiple laser batteries, and can field a crew complement of 6,000—8,000 terrans.[1] Gorgons can withstand multiple Yamato cannon hits.[3]

Moirai-class battlecruisers were developed for the Dominion Special Forces during the reign of Valerian Mengsk, and an upgrade over their predecessors. They had a lengthy research and testing period, and were made exclusive to the Special Forces. To accommodate their design, a special fusion core was developed for the special forces with quadruple the energy output but with no increase in its heat signature.[12]

The Sovereign-class battlecruiser was fielded by Matt Horner's Dominion Fleet, in conjunction with Mira's Marauders, during the End War.[36]

The Starcruiser was an advanced battlecruiser prototype sold by Crazy Bob's Bazaar.[37]

By 2504, the Dominion prototype Loki was undergoing testing at Valhalla.[27] It was deemed a "super-battlecruiser."[38] Aleksander has likewise been labeled as a "super battlecruiser."[39]

Mercenaries have made use of very heavily modified battlecruisers, using scrapped materials to improve performance and make their ships more intimidating.

Umojan battlecruisers feature redesigned neosteel plating, as well as refinements to the Yamato cannon that make them particularly distinctive in battles.[12]

In StarCraft: Ghost, the battlecruiser acted as a support unit for Nova. Through targeting, the player could call down a Yamato Cannon strike that dealt damage to all objects in an area.[41]

The battlecruiser is an available as a pet in Diablo III, in the form of Dominion's Revenge.[42]

The battlecruiser Hyperion appears in Heroes of the Storm, and is summoned by Jim Raynor.[43]

Other or Unknown Classes

Different sizes for battlecruisers have been given from differing sources. 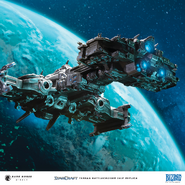 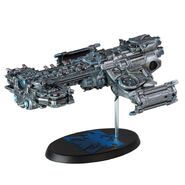 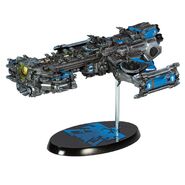