Edit
watch 02:34
Fire Emblem Warriors: Three Hopes - The Loop
Do you like this video?
Play Sound
"Who called in the fleet?"

The battlecruiser can move and attack simultaneously

The battlecruiser is the primary Terran capital ship. They require a starport with a tech lab attachment as well as a fusion core constructed.

Battlecruisers fire rapid low damage shots from laser batteries, with the anti-ground attack being more powerful than the anti-air attack. This makes them better able at handling groups of weaker, low armor, units. Battlecruisers are heavily armored. This makes them good against marines, liberators, phoenixes, carriers, hydralisks, mutalisks, and sentries. However, they are weaker against vikings, corruptors, tempests and void rays. Like in the original StarCraft, battlecruisers can withstand a single nuclear missile strike. They can shoot while moving. Terran players often use battlecruisers to draw fire from weaker units allowing those weaker units to survive longer to destroy the threat.

The Yamato cannon out ranges defensive structures and may be used to clear out defenses. It may also be used to soften up tougher units or thin enemy ranks quickly. This is especially useful in numbers against void rays, potentially eliminating several before they can charge up.

The tactical jump allows for tactical flexibility and to travel great distances quickly:

Blasts a target with a devastating plasma cannon, causing 240 damage.

The user warps to the target location. Vanishes from the map, but has a 1 second vulnerably phase before warping.

Enables use of the Battlecruiser Yamato Cannon, dealing 240 damage to a target.

Battlecruisers are unlocked by playing the "Maw of the Void" mission, available after Crown Prince Valerian Mengsk gave them to Raynor's Raiders in order to accomplish the mission.[2]

Battlecruisers are exclusive to Raynor once he reaches Level 6. Raynor can also call down the hero battlecruiser Hyperion to the field temporarily.

Stukov can call down infested hero battlecruiser Aleksander to the field temporarily.

Blasts a target with a devastating plasma cannon, causing 300 damage.

The user warps to the target location. Vanishes from the map and is invincible while warping. Does not require vision of the target area.

Battlecruisers are available for use by Nova starting from the mission "Dark Skies." They possess the Yamato Cannon and tactical jump abilities.[5] They can attack while moving.

Replaces the battlecruiser's standard weaponry with ATX laser batteries, which can target and attack multiple enemy units at once.

The user warps to the target location. Vanishes from the map and is invincible while warping.

Blasts a target with a devastating plasma cannon, causing 300 damage.

The quotes and voice can be compared to Captain Henry Gloval of Robotech. 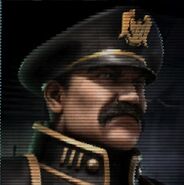