Bio-domes are terran structures used in ecological projects such as minor terraforming and advanced hydroponics operations. They are similar to command centers, but the more angular shapes are easier to manufacture, and not as overbuilt and militarized. It is more mundane in comparison however.[1]

The terran colonists of Haven used them.[2]

Colonist bio-domes were present on the Terran Dominion world of Cruxas III.[3]

There are five different bio-dome models, and each appears to have a different function. Additionally, there is a bio-dome that can serve as a command center, fittingly called a "command bio-dome". SCVs cannot be built from this structure, but they can return minerals and gas to it.

Most bio-domes have 2500 hit points. They have a load ability (although it does not work). Larger units, like hydralisks, give an error message saying they're too large to be admitted.

Command bio-domes can lift off and land like a regular command center.

Bio-domes can be buildings or doodads.

The concept of using the bio-dome as a command center was made specifically during the development of the single player campaign of Wings of Liberty. Strike team meetings were held and took in suggestions about artwork that could enhance the feel of the single player missions. For the Ariel Hanson evacuation missions, the idea was to have these colonization bio domes evacuating with the population. Although the idea behind their creation never came to pass, the command bio domes still show up in the Haven missions. The idea behind the design was simplifying the command center into more of a civilian building.[1] 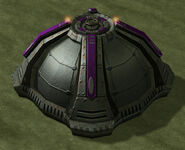 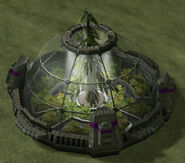 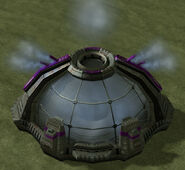 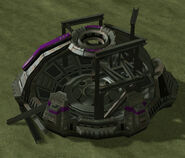 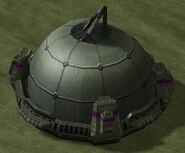 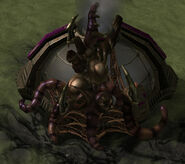 An infested bio-dome.
Add a photo to this gallery

Retrieved from "https://starcraft.fandom.com/wiki/Bio-dome?oldid=306436"
Community content is available under CC-BY-SA unless otherwise noted.