Edit
watch 02:46
The Quarry - The Loop
Do you like this video?
Play Sound
"I’m happy to announce that lastly, we have learned the details on the most terrifying of all Zerg forces: the Brood Lord. A true monster of the sky, the Brood Lord can unleash utter devastation upon any foes on the ground."

The brood lord is a powerful zerg flying unit.

"Evolved to rule the skies, the brood lords are terrifying creatures that hurl destructive broodlings at enemy forces."

Brood lords are massive manta-like flying creatures that serve as the Swarm's aerial siege units. They are used only in the largest of conflicts.[1]

The brood lord was originally morphed from the corruptor.[1] The glowing bulbs on the brood lord's back are an evolution of the cancerous growths in the corruptor's tentacles. Alterations at the genetic level turned the growths into sacs capable of rapidly spawning large batches of broodlings. Its tail is also derived from the corruptor, namely its statocyst. The brood lord's tail structure (including the spikes) constitutes a large biological gyroscope that maintains the creature's level and orientation. The tail is directly linked to the brood lord's sensory organs, increasing its capability to locate prey. Bone spikes located on the frontal section of the brood lord's wings house an advanced glandular system capable of emitting and receiving high-frequency electrical pulses. With each pulse, a massive spherical field radiates from the creature, coating its surroundings and targets in bio-electric energy. Afterwards, the brood lord's acute receptor glands pick up and process the gathered data. During deep space flights, the glands mutate to detect sources of radiation, electromagnetism, and light.[2] In battle, if the Swarm gains air/space superiority, it is common for them to evolve their fleet of corruptors into brood lords en masse to help with the ground battle.[3]

Brood lords are also capable of adapting their biology to suit their theater of combat. During the invasion of a planet with exceptionally large seas, brood lords evolved to be more suited in aquatic combat, allowing them to chase their prey deep into the planet's trenches. Leviathan Brood brood lords retain the brood's pre-disposition for spikes, possibly as a result of Abathur's experimentation.[4]

The brood lord releases biological symbiotes on ground targets. These small creatures regulate some of the brood lord's biological functions, and can also serve as living ammunition. The brood lord has clusters of broodlings squirming under its carapace at any given time. In combat, the brood lord supercharges the broodlings’ aggression and metabolism, turning them into short-lived (but very effective) air-to-ground weapons.[2] Each broodling starts out as a projectile, inflicting initial impact damage. But once on the ground, they enter a frenzied melee assault,[3] tearing through personal armor and vehicular plating with ease[2] until they reach the end of their short lifespan or are destroyed. Left unharmed, a brood lord will disgorge a steady stream of broodlings capable of ravaging even large armored units in quick succession.[3] However, brood lords themselves are not very durable, and are vulnerable against aerial-strike combatants.[1] Brood lords have also been know to ram at ships with their mouths.[5]

Brood lords enslaved by the Cerberus Program were able to re-engineer the nervous systems of the brood lords and the broodlings they spawned to be controlled by a distant terran commander.[4]

Brood lords are one of the latest additions to the Swarm,[4] replacing the guardian of previous conflicts.[3]

The genetic templates for multiple strains of zerg were lost during the Second Great War when the Swarm fragmented after the Battle of Char, including those for the corruptor and the brood lord.[6]

The brood lord's template was reacquired from feral brood lords at Sigma Centari, a Terran Dominion defense platform. With the viper, it became one of the strains based on the mutalisk.[6]

A small number of brood lords were integrated into the primal zerg packs, resulting in a strikingly different creature most notable for its unusual claws.[4]

By 2505, the brood lord was once again evolved from the corruptor via the genetic remnants of corruptors preserved in greater spires.[3]

Brood lords replace guardians as the zerg aerial bomber. Like the guardian, it has a long-ranged ground attack and no defense against air units. Brood lords launch broodlings; the broodlings do damage upon impact, and then act as separate timed-lifespan ground units. Brood lords can sustain a stream of single broodlings; the first attack after a break launches two broodlings. Unless the enemy uses extensive micro-management or air-to-air fighters, the broodlings are an excellent distraction for ground-to-air units on top of the damage boost. Left unchecked a relatively small group of brood lords can end up doing catastrophic damage to an enemy base since very few enemy units or turrets will end up actually firing on them.

Compared directly to other "siege" units the brood lord is a powerful late game option. Like other siege units it can out-range defense turrets, but it's ability to fly gives it several advantages over the others. For one, most of the other siege/anti ground units can't even fire on it. Flight also gives it even better mobility than immortals by letting it pass clean over truly impassible terrain, such as lava lakes and deep canyons, letting them attack enemy bases from usually unexpected directions. A group of brood lords supported by anti-air units such as corruptors or even baseline mutalisks can be very difficult to stop.

However, brood lords on their own are slow and immobile, and are vulnerable to attacks from vikings, mutalisks, corruptors, void rays and phoenixes. If anti air units such as stalkers are able to get under them and focus fire, they can be brought down with relative ease. Their high cost and high place on the tech tree also makes it hard to amass a critical number of brood lords without also investing in other units to defend from harassment and timing pushes in PvP.

In the Heart of the Swarm campaign, the brood lord is one of the evolution choices for the mutalisk. Choosing the brood lord prevents the use of the viper.[6] The Viper is akin to a Corsair, purely anti-air barely more capable than a mutated Mutalisk with some ground disruption and the ability to move ground units to itself, but this is still barely helpful in comparison to a swarm of Brood Lords that can easily level entire bases over time, including ones that the campaign commanders say "Don't attack there it's too well defended."

Brood lords do not appear in the main Legacy of the Void campaign, as enemy zerg utilize the guardian instead. However, void shades can take the forms of brood lords.

Brood lords are usable in the Epilogue mission "Amon's Fall."

Brood lords are usable by Kerrigan in Co-op Missions. They evolve from the mutalisk once the player controls a greater spire. Kerrigan's brood lords attacks spawn two broodlings with each attack.

Stetmann can create an enhanced strain of brood lord named the mecha battlecarrier lord, combining a brood lord with the abilities of the carrier and battlecruiser.

Increases brood lords movement speed by 1.406 and acceleration to 1.875, and increases health by 100.

By April 2009, the brood lord replaced the swarm guardian.[8] It had 350 HP, dealt 25 damage from 9 range, and spawned one broodling per attack.[9] By August, it was morphed from the corruptor instead of the mutalisk.[10] At some point, the brood lord possessed the name "Mantalisk."[11]

The combat role of the brood lord fluctuated for a very long time. Many variations of the guardian were presented but the intention was always clear that the development team wanted more out of this new flyer. Finally out of the blue, Samwise Didier concepted the brood lord like a bolt of lightning and thus the design team created the 3D art in accordance to his concept. The head design was lifted from the scrapped morphalisk.[12] At some point in development, the brood lord was evolved from the mutalisk in multiplayer rather than the corruptor.[13]

StarCraft II beta patch 7 decreased its damage from 25 to 20. Patch 11 decreased its HP from 275 to 225 and armor from 2 to 1. Patch 15 decreased its weapon upgrade bonus from 3 to 2. Patch 1.3.3 modified Point Defense Drones to no longer shoot down the brood lord's projectiles.

The Frenzied ability was added to the brood lord in the Patch 2.1.2 Balance Update in Heart of the Swarm in the context of swarm host matches, coupled with mass spore crawlers. As swarm hosts were altered in Legacy of the Void to be more mobile, the ability was deemed unnecessary.[14] Patch 2.5.1 of the beta increased the brood lord's attack range from 9.5 to 11. Patch 3.8 reduced it to 10. Patch 4.11 decreased broodling leash range from 12 to 9. 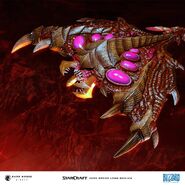 Heart of the Swarm campaign appearance 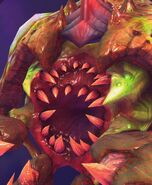