Start a Wiki
watch 02:27
The Loop (Games)
Do you like this video?
"We can take cover in these bunkers if things get too dicey!"

The bunker is a terran defensive structure.

"Now we could use some chairs please. Pretty please."

- A Dominion marine commenting on the bunker's interior.(src)

Bunkers, sometimes referred to as "battlefield coffins" due to their ubiquity and lack of amenities,[1] are low-domed structures that may be constructed with paristeel[2] or neosteel[3] plating. They may be built almost anywhere[4] using manufacturing processes which are standard for SCVs. Once erected the armor plating makes them very difficult to take apart.[2]

The bunker typically accommodates, but is not limited to, four individuals. Weapon ports are located on all sides, with ammunition racks above them. Entry and exit is through a single hatch to the rear.[3]

Wolfe Industries sold an improved bunker firing port with a magnetic rail during the Second Great War; the rail increased the muzzle speed of fired projectiles.[5] Raynor's Raiders also developed upgrades during the war. The shrike turret added an automated gun on the roof and was based on the zerg spore crawler. Another upgrade added an armored carapace to the exterior and was based on the ultralisk.[6]

The next generation of Dominion bunkers were improved to withstand the full weight of an ultralisk, and were designed with chairs, much to the delight of the marines who had to use them.[1]

The bunker may garrison any four terran infantry units. While inside units may not be harmed by enemy fire although they are still affected by any affects they had prior to entering. Units with ranged attacks may fire out with +2 added to their range. Units may not activate any abilities while inside, although stimmed marines and firebats will still enjoy the benefits of stimpacks if they used the ability right before entering a bunker. If a bunker is destroyed its occupants emerge unharmed. The bunker's fire can not be directed by the player.

While adept at dealing with en masse attacks of weak units, the bunker is vulnerable against heavy ones. Bunkers are effective holding off chokepoints when backed by missile turrets, goliaths and siege tanks. This makes them very deadly against many zerg units and several terran units, but against the protoss, they do little to prevent a large-scale attack from zealots and dragoons, which can take far more punishment compared to most basic ground units. In addition, the bunker's range is outclassed by siege tanks, battlecruisers, guardians, carriers and occasionally reavers.

In addition, bunkers can provide more damage and receive a lower chance of being hit back when on high ground.

Protoss and zerg units such as Infested Duran cannot enter the bunker. Only SCVs, marines, firebats, ghosts, medics, civilians and non-infested hero versions of those terran infantry units may enter.

Bunkers featured in the multiplayer of StarCraft: Ghost. They had three gun ports, the fourth side of the structure being open for entry.[7]

In the recent builds of StarCraft II, reapers were changed to only take up one slot.

Removes the structure and returns 75% of the structure's mineral and vespene gas cost. The process may not be aborted once started. A bunker cannot be salvaged while units are still in it.

Bunkers now display how many units they have currently "loaded" without needing to select them. Some units, such as firebats, marauders, reapers or ghosts, take up two slots.

Units can be rallied to automatically enter bunkers.

In gameplay, bunkers serve well against the zerg in gaining ground.[8]

Marines and marauders in a bunker can use their stimpacks. Stimpack becomes available within the bunker commands (load, unload, etc.). Bunkered medics may heal units in the same bunker.

Ghost abilities are not available.

This improved bunker design, inspired by the ultralisk exoskeleton, attaches a hardened carapace to the top of the bunker. This carapace dramatically increases the amount of punishment that a bunker can absorb.[6]

Adds an automated turret to bunkers.[6]

We have developed an automated turret that comes standard with all bunkers. This turret, which is based on our studies of spore crawlers, adds extra firepower to manned bunkers and also allows unmanned bunkers to contribute to base defense.

Wolfe Industries has developed a bunker port that houses a magnetic rail. This device dramatically accelerates all projectiles coming out of the port, increasing the range of all weapons fired from the bunker.[5]

This all-in-one safety system automatically dispatches robotic drones to put out any fires and perform basic repairs on damaged structures. Although these drones are effective at doing basic repairs, they do not have a strong enough AI to perform the more delicate repairs needed to restore a structure past half life.[5]

Jim Raynor can build Bunkers in Co-op Missions. When infantry is garrisoned in Bunkers, they get +1 to attack range. After reach Level 7, Bunkers gains +50% hit points and equipped with Shrike Turret.

Alexei Stukov can build Infested bunkers with can create and garrisoned Infested troopers and can move and attack in melee when unburrowed.

Arcturus Mengsk utilizes supply bunkers, combining bunkers with supply depots. He can used the Forced Conscription calldown to call one down with 6 troopers within.

Salvages this structure, removing it and returning 100% of its mineral and gas value cost. Salvage takes 5 seconds to finish. Warning: once Salvage is triggers, it cannot be canceled.

Equips bunkers with automated turrets that attack ground and air units. Increases the life of bunkers from 400 to 600.

Bunkers appear as the fortresses and keeps on the Warhead Junction and Braxis Holdout maps of Heroes of the Storm.

A modified version of the bunker appears as the model for the egg of Murky's Grunty skin in Heroes of the Storm.[9] 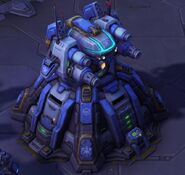 A bunker keep in Heroes of the Storm 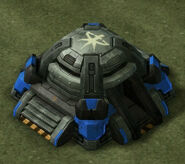 A bunker with neosteel armor upgrade 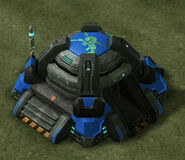 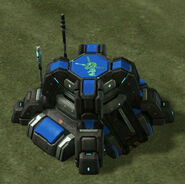 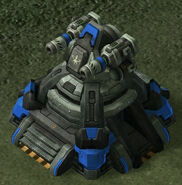 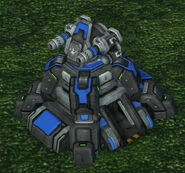 Retrieved from "https://starcraft.fandom.com/wiki/Bunker?oldid=359562"
Community content is available under CC-BY-SA unless otherwise noted.