Edit
watch 02:34
Fire Emblem Warriors: Three Hopes - The Loop
Do you like this video?
Play Sound
"Carrier has arrived."

The carrier is a protoss heavy air unit.

"These magnificent capital ships are known to inspire hope in the hearts of templar—or fear in their enemies. Armed with swift interceptors, they are a formidable force on the battlefield."

Carriers are among the most powerful warships in the protoss arsenal,[2] and frequently take point in fleet maneuvers.[1] In use prior to the Discord,[3] they serve as command centers for fleet commanders,[4] though some terrans think this position will be taken by the void ray.[5] Carriers made their way into the Tal'darim arsenal after their engineers re-purposed Khalai designs, and make up the majority of the Death Fleet's ships.[6] The Purifiers[6] and Nerazim also make use of carriers.[7]

Carriers have forward mounted energy weapons used for purification,[8][9] though standard carriers lack any armaments for use in standard ship combat beyond interceptors.[4][10] Carriers may make warp space jumps,[9] carry psychic boosters for communication, and can operate in both atmospheric and deep space conditions,[11] easily descending into a planet's atmosphere if the need arises.[1]

"I do not command a starship. I command a force of nature."

Carriers are large, heavily armored, and are protected by plasma shields,[4] When constructing these ships, Khalai craftsmen meticulously shape high-density alloys into thick curved plates, using extreme temperatures to remove any structural imperfections which could compromise their strength. Afterwards, the alloy is subject to a complex surface treatment that involves different gasses and substances. The resulting hull plates are not easily breached, be it through kinetic, thermal, or biological means.[12] The carrier is powered by a central crystal matrix, an advanced khaydarin crystal that has its powered channeled through the ship via a crystal relay matrix. These crystals discharge spent ions, requiring the Khalai Caste engineers who maintain them to wear radiation suits. Carriers utilize vespene gas as a fuel source. The internal design of each carrier varied, reflecting the creativity of its design team.[13]

Carrier commanders have private quarters.[11] Carriers are further equipped with a bridge[14] and teleportation platform.[15] The carrier's hangar is capable of housing craft such as scouts, arbiters,[11] and phoenixes.[15] Connected to the hangar is an automated manufacturing plant that produces interceptors. Khalai engineers work in the plant, where they see to the interceptors' maintenance and launch operations. After the Great War, the protoss sought to improve carrier efficiency, which led to the installation of the graviton catapult.[12]

Prior to the end of the Brood War, many carriers were designed with a more curved and bulbous design to mimic the flagship Gantrithor. Certain corners of protoss space still construct ships in this style to honor Tassadar and his sacrifice.[6]

Tal'darim carriers differ from the Daelaam/Khalai design; they are warships through and through.

Purifier carriers are more streamlined for automation, and possess an arsenal of deadly drone weapons.

The Ihan-rii developed carriers made of a light, durable and chemically inert animated stone.[6]

Carriers are an ancient craft that were created in the Second Age of the Protoss Empire.[6]

Around the time of the Great War, carriers had smooth curved hulls and a bulbous design, in the style of the flagship Gantrithor.[6] However, by the end of the Brood War the carrier was considered to be slow, bulbous and dangerous as their weaknesses were known and exploited by the zerg, with some Templar speculating that they were only maintained in the Great Fleet as a relic of the past, opting in favor of the more efficient void ray. Nevertheless, the legend and reverence of carriers such as Koramund prevented the retirement of the carrier.[13] By 2502, many carriers had undergone a redesign, with a more pointed and jagged hull.[16]

In 2506, during the End War, phase-smith Karax was able to miniaturize Spear of Adun's reconstruction beam technology that allowed it to remotely repair mechanical units and structures. This allowed the Daelaam to arm their carriers with automated drones that could do the same types of repairs, greatly enhancing the longevity of their carriers.[17] Meanwhile, carriers under the control of Amon began to change in appearance due to their exposure to Void energies, with crystal structures jutting from the sides.[6]

After the End War, a small number of Khalai carriers were redesigned using ancient methods to resemble carriers from the Second Age. These carriers were often used for diplomatic visits.[6]

Carriers were to appear in StarCraft: Ghost.[18]

According to a Diablo III post, carriers are equipped with plasma charges, allowing them to punch through enemy formations.[19] This stands in contrast to information which states that carriers are bereft of ship-based weaponry bar interceptors and the purifier beam.[4][8] The interceptors themselves are fitted with two small plasma cannons.[12] 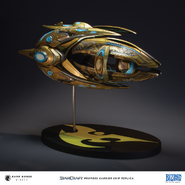 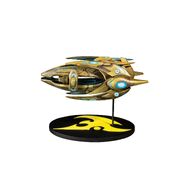 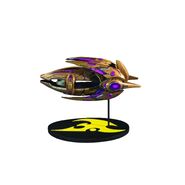