Edit
watch 02:56
Raise a Floppa - The Loop
Do you like this video?
Play Sound
"I am Shadow Guard, I am the shield of twilight!" 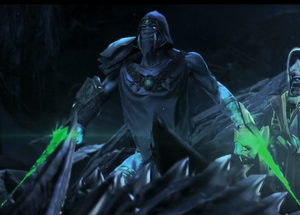 The centurion is a type of Nerazim warrior. They are a zealot variant available in the campaign of Legacy of the Void.[1]

Centurions serve as the backbone of the Nerazim Shadow Guard, and joined the Golden Armada for their campaign to retake Aiur.[1]

The centurion's stats are identical to the base zealot, making them function as powerful melee attackers. Their key difference over the Aiur zealot and sentinel is their abilities, Shadow Charge and Darkcoil. Shadow Charge allows them to phase through enemies when charging, while Darkcoil stuns enemies around them when they attack. This makes the centurion an effective supporter in larger armies, rushing forward to stun enemies while the rest of the player's forces engage. They also benefit from being able to phase through other units to reach their targets, allowing them to quickly engage enemies even if initially caught up in a crowd.

Intercepts enemy ground units and increases movement speed. Briefly cloaks the centurion and allows it to move through other units. Can be set to autocast.

Upon attacking an enemy, the centurion stuns nearby enemies for a brief time. Massive units instead have their attack and movement speeds halved for the duration.

In Co-op Missions, Vorazun's zealots automatically become centurions upon her reaching Level 4. Their abilities must be researched at the twilight council.

Intercepts enemy ground units and increases movement speed. Briefly cloaks the Centurion and allows it to move through other units. Can be set to autocast.

Passive: Increases the movement speed of Centurions from 2.75 to 3.

Upon attacking an enemy, the centurion stuns nearby visible ground enemies for a brief time. Massive/Heroic/Unstoppable units instead have their attack and movement speeds halved for the duration. Grants 100 shields for 10 seconds.

Withering Siphon: Darkcoil affects Massive/Heroic/Unstoppable units and causes enemy units to lose 5 hit points every 0.25 second, up to a maximum of 50. This effect cannot kill.