13
"Chokers. They'll pull in your forces and stun them if they aren't dealt with."

The choker is a variant strain of the infestor. During the Second Great War, a number of them were spawned on Meinhoff.[1]

During the End War, they appeared on a fringe Terran Dominion colony, and allied commanders called in had to destroy them.[2]

The choker appears in the map "Left 2 Die" as a zerg NPC unit. It is more offensive-based than the infestor, capable of engaging enemies directly. It has a tentacle attack that shoots up to 2 tentacles that drag targets towards it, doing damage over time.[1]

The choker counters bunkers and planetary fortresses since chokers both out range and deal additional damage versus structures.

The only semi-effective counters versus chokers are barracks units stimmed with medics to focus fire them or well-placed siege tanks.

The choker's tentacle ability makes it highly dangerous against lone units. The units are first hooked by a tentacle similar to the Neural Parasite which drags them toward the choker whilst incapacitating and damaging them. The unit is only released if the choker or its prey are killed.

While the choker's tentacle attack makes it dangerous toward lone units, and its attack out-ranges both bunkers and planetary fortresses, a simple counter is to place a marine or SCV behind a bunker with a medic or two. The choker will move to grab the unit with its tentacle, opening it up to fire from the bunker.

Chokers appear as special infested on the "Dead of Night" mission in Co-op Missions. They are disruptive, long range attackers that can stun and drag victims from defensive positions.[2]

It is important to note that the choker's tentacle attack stuns (and eventually kills) heroic and massive units as well. Thus, hero units that are capable of fighting the infested alone, like Nova and Kerrigan, are easy targets for the choker if caught with no immediate support. Chokers were changed so that they can only stun one heroic unit at a time.[3]

As Left 2 Die is based on Left 4 Dead, so too is the choker likely based on the smoker. 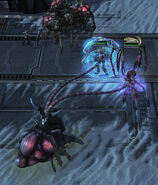 A choker stunning Nova and Kerrigan

A choker fighting Raynor forces during the End War