Edit
watch 02:53
GTA: The Criminal Enterprises - The Loop
Do you like this video?
Play Sound
"Titanic-class Colony Ship. Capable of transporting hundreds of civilians and all necessary equipment to start a new colony."

The Titanic-class colony ship[1] is a terran aerospace transport.

Colony ships are used by the Terran Dominion in order to support existing colonies or settle new ones. They are outfitted with puddle-jumpers for atmospheric landings, and are usually uplinked with an adjutant. Colony ships have the necessary tools needed to start new settlements on alien environments, including an automated lab (outfitted into their puddle-jumpers) that can assess the bacteria and pathogens native to a planet and create vaccines suited for them. Onboard scanners and probes can map the geography, topography, landmarks, atmosphere and lifeforms on a planet, including detailed data on their migration patterns and diets.[2]

Colony ships appear in the Wings of Liberty single-player campaign.[3] It is primarily used for transporting civilians and all necessary equipment to start a new colony. In the campaign, it is an NPC unit, but it is available to the player through the map editor. The colony ship has fifty passenger slots, but cannot load units with a transport size greater than eight. This means it cannot load massive units such as the thor. The colony ship can also take off and land and can (un)load units while both airborne or on the ground.

Despite being larger than the Hercules dropship, it is not a massive unit like the Hercules. The colony ship also costs less resources and supply than the Hercules, has less armor and utilizes the same model, the only difference being the units' size.[4]

Colony ships appear in "Death from Above" in Heart of the Swarm as a background unit. Unlike the colony ships in Wings of Liberty, these ships have a unique portrait.[1]

This ship can lift off, enabling it to fly. While in flight, the ship can land.

The colony ship was one of the early undertakings to create unique artwork for the campaign of Wings of Liberty. The Hercules dropship stemmed from its conception.[6] 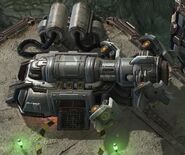