The creeper is a strain of primal zerg spawned by higher strains.

Creepers appear in Heart of the Swarm, where they are spawned by Slivan. They detonate a few seconds after reaching their target in a manner similar to banelings, but move slowly, hence allowing Kerrigan time to move out of the way even as they begin to detonate.[1]

Creepers are spawned by creeper hosts in Co-op Missions. Like locusts, they fly, and swoop down to their targets, but unlike locusts, they detonate on impact. They deal bonus damage to structures. Murvar can spawns explosive creepers if Dehaka reach level 10 in talent progression.

Orders the volatile creeper to land at target location, so it may attack enemies.

Creepers are spawned by the swarm host boss on the "Warhead Junction" map of Heroes of the Storm.[2] 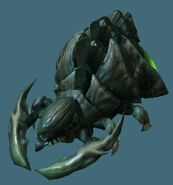 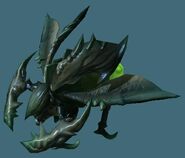 Flying primal creeper
Add a photo to this gallery

Retrieved from "https://starcraft.fandom.com/wiki/Creeper_(primal_zerg)?oldid=348049"
Community content is available under CC-BY-SA unless otherwise noted.