Edit
watch 02:52
Roblox: DeepWoken - The Loop
Do you like this video?
Play Sound
"The protoss are known to pair their elite fallen warriors with artificial bodies, granting them a second life in glorious combat. The cybernetics core plays a large role in developing this technology."

Within the cybernetics core are the necessary construction materials, automated factories and the mysterious essence translators that bond the spirits of fallen protoss to the cold metal exoskeletons of the dragoons and other such walker.[1] Eventually, by focusing through the Khala, the fallen warriors can control the movements of the quadrupedal dragoon as naturally as if they were within their former bodies.[2]

Cybernetic cores are famed for their ability to blend machinery with biological beings and psionics through the use of advanced essence translators. Cybernetics cores also provide protoss commanders with the necessary auto-fabricators and materials needed to stage successful battlefield operations. The structure itself is equipped with flux dissipators, photon stabilizer arrays, and phase alignment amplifiers that give protoss warriors a decided edge on the battlefield where numbers are typically in the enemy's favor.[3]

The Tal'darim utilize cybernetics cores much in the same way as the Khalai, to bind biological beings to machinery, but do so in an unimaginably painful way. The Ihan-rii utilize structures very similar to cybernetic cores in their settlements, but that produce a vastly different energy signature.[1]

The cybernetics core allows for the warp-in of the protoss dragoon and provides upgrades for protoss aircraft.

During the StarCraft alpha, the cybernetics core was known as the "gencore."[4]

Mastery: +11 sp per Structure Health and Shield mastery point. Up to a maximum 880 (Co-op Karax)

Mastery: +11 hp per Structure Health and Shield mastery point. Up to a maximum 880 (Co-op Karax)

See below
The cybernetics core acts as a support structure in StarCraft II. It allows for the warping in of stalkers, sentries, and the mothership core.

Enables gateways to transform into warp gates. This ability is autocast.

Zeratul has access to an advanced cybernetics core named the core forge, which automatically gains research upon finding artifact fragments.

Increases radius of Squad Sight and casting range of Target Lock and Force Field by 3.

Increases the damage bonus to enemies targeted by Target Lock by 15%.

All havocs are permanently cloaked.

Increases the duration of the Conservator's Protective Field by 100%.

The cybernetics core had an uneventful creation and implementation in StarCraft II. After one slight cosmetic improvement, the team let it be.[5] 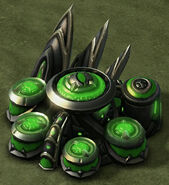 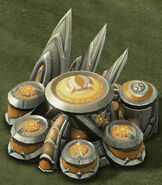 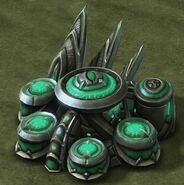