"From the shadows I come."

The dark templar appears in StarCraft II. It retains its permanent cloaking.

The only difference in the two types of dark templar is their appearance, otherwise the two move and attack just as quickly as the other. Due to their increased gas cost from StarCraft and the long time spent to warp in a dark shrine, dark templars are a more costly investment than before.

Dark templar are effective against worker lines. Their high base damage kills workers in single hits, with damage upgrades outpacing worker armor upgrades. Warp prisms and warp-in may be used to produce dark templar directly in an enemy base. The dark templar's cloak is active during the warp-in sequence.

Mixing dark templar into an army may mask their presence and attacks if enemy passive detectors are not present.

Dark templar come in two varieties with unique portraits and models. The type produced is randomly selected when a dark templar is created. However, mechanically they are identical.

Teleports the Dark Templar to a nearby target location.

The dark templar is one of three cloaked warriors available to the player in the campaign, the others being the avenger and blood hunter. The dark templar in the campaign have the new ability Shadow Fury, which allows them to rapidly strike up to five ground enemies on the battlefield for 35 damage. This makes them excellent against zerglings, with a few dark templar able to cut up a zergling swarm in second. Against larger, most powerful enemies, the dark templar's Shadow Fury will hit the target all five times, making it an effective damage dealer. The attacks CAN also hit buildings, but Shadow Fury cannot be triggered by them either automatically or manually; at least one enemy unit has to be nearby to start it. This does mean that even a moderately-sized group of Dark Templars can do ruinous damage to a section of a base very abruptly if there are some units nearby to trigger them into the buildings. However, they lack the more defensive utility abilities of the avenger and blood hunter, and given their high resource cost, the player should be wary not to lose their dark templar recklessly. Unlike their multiplayer counterparts, dark templar in the Legacy of the Void campaign cannot merge to become archons, and dark archons are warped in separately.

The dark templar rapidly teleports around the battlefield, striking up to five enemies and dealing 35 damage to them, then returning to its initial position. Can strike the same enemy multiple times. The dark templar is immune to damage during this ability.

In Co-op Missions, elite variants of dark templar called shadow guards may be used by Vorazun. She is also able to access exclusive upgrades for her dark templar at the dark shrine. Like in the Legacy of the Void campaign, dark templar cannot merge into archons.

Vorazun's dark templar have 80 bonus shields, for a total of 160, and cost

Rapidly teleport around target area, striking enemies for 20 (+15 vs light) damage up to five times. Can be set to autocast. Cannot target cloaked enemies without detection.[5]

Shrouds an enemy ground unit or structure in void energy, preventing it from moving, attacking, being damaged, using abilities, or detecting. Can be set to autocast, in which case the unit will only seal enemy detectors.

In order to make the Dark Templar different in appearance from zealots, Blizzard artist Samwise Didier gave dark templar different weapons (a bladed staff weapon) and armor covered with zerg bones.[6] Two types of dark templar are featured – one model, the Zer'atai, has a shadow scythe, another, the Lenassa, has a warp blade.[7] A Predator-inspired "zerg hunter" dark templar model was also conceived by Didier.[8]

Dark templar with two blades were suggested, but not implemented by beta.[10]

Dark templar used to be able to merge into twilight[11][12] and dark archons,[9] but both were cut from final release.

In Legacy of the Void Patch 3.8, dark templars gained the ability to gain shadow stride, a short range blink, from the dark shrine. 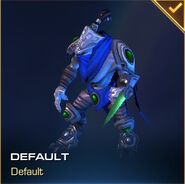 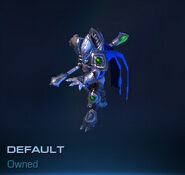 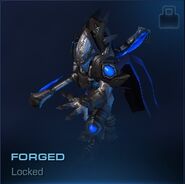 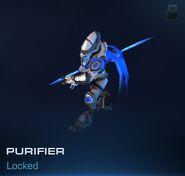 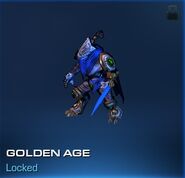 Retrieved from "https://starcraft.fandom.com/wiki/Dark_templar_(StarCraft_II)?oldid=330734"
Community content is available under CC-BY-SA unless otherwise noted.