Donald "Donny" Vermillion[2] is a former member of Universal News Network. He has a cat named Augustus.[3]

"...and in other news today, Emperor Arcturus Mengsk held a press conference commemorating the end of the so-called Brood War some four years ago. Our own Kate Lockwell was on the scene."

- Vermillion in one of his broadcasts(src)

At the outbreak of the Second Great War, Vermillion reported the massive zerg invasion of the Sector.[6] His war reporting dispensed Dominion propaganda and portrayed Raynor's Raiders very negatively, often deliberately twisting facts to cover up the heroic nature of many of their missions and cutting off field reporter Kate Lockwell before she could say anything praising Raynor and his men.[7] On at least one live newscast during the war, Donny was forced to witness a colleague reporter run down by the zerg, something that visibly filled him with horror.[8]

When Raynor and his men broadcast the news that Arcturus Mengsk had used psi emitters to lure the zerg to Tarsonis,[9] Vermillion was shocked by the news, muttering to himself on the air that his brother had lived on Tarsonis.[4]

He shortly began to miss his work, prompting Kate Lockwell to hope he would get well soon.[10]

"Ladies and gentlemen, this is a sad day for us here at UNN. I regret to inform you that last night Donny Vermillion had himself committed to the Dominion Mental Health Center here on Korhal. While the nature of his abrupt mental breakdown remains unknown, we do know that he was clad only in his socks and rumored to be in possession of Emperor Mengsk's manifesto and a pound of peanut butter. We wish you all the best, Donny, and hope for your speedy recovery. In the meantime, I'll be taking over as chief anchor here at UNN. For UNN, I'm Kate Lockwell."

After he reported the zerg retreating back to Char, Vermillion took a sick leave for unknown reasons and eventually committed himself to the Dominion Mental Health Center, clad only in his socks and rumored to have been in possession of Emperor Mengsk's manifesto and a pound of peanut butter. He was replaced as chief anchor by Lockwell.[11]

"The resort world of Veridia was once a jewel in the Dominion's crown. Today, that jewel has cracked, metaphorically, AND by lava. The planet's only hope? Two commanders, whose workers must refuel the stabilizer. Let's join the mission already in progress."

Vermillion was later released from rehabilitation, and during the End War reported on the operations of allied commanders on Veridia Prime as the planet underwent destruction at the hands of the forces of Amon. The allied commanders attempted to gather 20 xenon crystals and bring them to an environmental stabilizer, which would halt the planet's destruction. Vermillion and his seismologist Terry reported on how long it was until the planet's destruction and the status of the surges of lava that occurred at regular intervals, and focused on aspects of the conflict that would gain them the most viewers. Vermillion and Terry were at odds through the assignment, as Vermillion thought Terry was both boring the audience with hard science and attempting to steal the spotlight.

At the end of the conflict, the allied commanders were successful in preventing the planet's destruction, much to the disappointment of Vermillion.[12]

"After an astounding recovery, Donald Vermillion returns to the Universe News Network. Welcome back, Donny. We missed you!"

Some years after the End War, Donny Vermilion returned to UNN after what was described as an astounding recovery. He hosted a segment on the Dominion relief effort to Antiga Prime, featuring General Carolina Davis and Magistrate Grayson. After the Dominion declared no zerg threat after their appearance on Antiga, Vermillion questioned what the Dominion was not telling their population. He also conducted an investigation on the Defenders of Man militia group.[2]

"I put my heart and soul into my work, and what's it gotten me? Mocked, derided, cast aside... People say Donny Vermillion's a propaganda artist. A tool of the state. A shill. Well I intend to prove them wrong. All of them. Even if it kills me."

By some time after the Battle of Adena, Donny Vermillion had left UNN and started his own show, "The Donny Vermillion Show," which reported the news in a manner pro-Arcturus Mengsk, and was critical of the regime of Valerian Mengsk. However, he was often dismissed as a shill of the old government, something that he intended to prove people wrong on.

The day before the anniversary of Arcturus Mengsk's death, Vermillion received a tip from a xenophobic freighter pilot who was a fan of his works, telling him he found a story. The pilot took him to the plant Tartarus on the fringes of Dominion Space, a place that Donny had never been allowed to report on while at UNN that may have housed secrets from Arcturus's regime. The pilot told him that Vermillion's broadcast had convinced him to kill his superior officer after they had derided him for too much violence against aliens, which made Vermillion uncomfortable.

The ship came upon Tartarus, which was defended by a satellite network. The pilot noted a zerg presence on the planet he had not noticed before, and ran his ship into the defense network. Vermillion urged him to turn back, but the pilot insisted they find the story. He told Vermillion to use a turret below, but the hatch led to an escape pod, and the pilot ejected the reporter to the planet below as his ship was torn apart by the defense grid.[3]

Vermillion came out of the escape pod, and wandered the infested surface of Tartarus. He tried to transmit his findings via holocam, but found it blocked, instead recording it for use when he left the planet. Soon he ran across two survivors, a doctor named Evelyn Yoo and her son Jun-Ho Yoo. Evelyn pointed a gun at Vermillion, telling him she'd been stranded here for a month, and that she needed his ship to leave. Having arrived in a crashed escape pod, Vermillion told her he had no ship, but she did not believe him. The confrontation was interrupted when a hydralisk attacked, and Vermillion shoved Evelyn out of the way to escape. However, as he ran down an alley, he found himself cornered by the hydralisk.

Vermillion was saved by renegade ghost agent Nova Terra, who had been tracking him since he landed on the planet. She killed the hydralisk with a blast from her hellfire shotgun. Her second-in-command Reigel rescued Evelyn and Jun-Ho, and Vermillion feigned happiness they had survived. Evelyn responded by punching him in the face.

As Vermillion nursed his wounds, Nova questioned Evelyn on the situation, and found she knew of the jorium refinery she had worked at. Nova told the group that at dawn, they would move on the refinery.[13] The next day Vermillion went with the group into the refinery, entering a hole left by the zerg when they broke out. They entered what appeared to be a training facility under the refinery, and Evelyn and Nova began arguing. While they were distracted, Vermillion picked up a discarded scientist's key card and opened one of the doors, revealing a zerg queen. The group retreated behind another door, but inside discovered a room filled with pods containing spectres.[14] 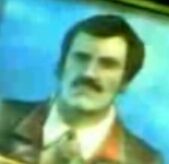