Dragoons serve primarily as mobile anti-air defense. It is more economical to have zealots take the brunt of fighting enemy ground units whenever possible. Compared to zealots, the dragoon fires slower and has an attack optimized against only large-sized units. The relationship is similar to that between marines and goliaths. Due to their large size and somewhat slower movement to the zealot, dragoons are fairly vulnerable to groups of smaller units such as massed zerglings and hydralisks. Despite this, many players utilize dragoons as far as a late game due to their important usage as anti-air defense and fire support.

Each dragoon occupies four out of the eight slots on a shuttle.

Dragoons become available to the player in the campaign with the mission "First Strike" in Episode III and "Escape from Aiur" in Episode IV.

"It's not what we were shooting for in 98, but since it's been part of the game, it’s become expected. Instead, they viewed these kind of movement bugs as features."

The dragoon was the first protoss unit developed, and served as the jumping off point for the rest of the protoss faction. However, the protoss would end up differing from the dragoon concept in that they were revised to be a biological species, whereas the dragoon basis had them as a robotic species.[1]

It was designed by Samwise Didier, albeit haphazardly. During development he drew an image of a quadrupedal tank. The developers asked "why don't we make it shoot energy balls?" The response was in the affirmative, and thus, the dragoon was born.[2]

Dragoons possessed an appearance in the StarCraft alpha identical to their end appearance. However, they were armed with fusion cannons instead of phase disruptors.[3]

During this period, they were called "Templar."[4]

It is voiced by Allen Adham. 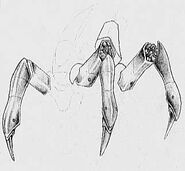