The engineering bay is a terran building used to improve the quality of weapons and armor fielded by infantry.[1]

Within the Dominion Armed Forces, whenever a strike force is deployed planetside, the engineering bay is one of two key research facilities to be established in a field base as soon as possible (the other being the armory), improving the quality of infantry weapons.[2] During the Great War, these structures were equipped with the ability to lift off and move to a new location. However, after the Brood War, the engineering capabilities were improved, increasing the personnel of the structure and intricacy of their work. Because of this, engineering bays were no longer cleared for flight.

The Dominion Special Forces utilize AIs in their experimental engineering bays, which increase their research speed by fighting each other in simulated battles.[3]

The engineering bay upgrades the quality of weapons and armor used by terran infantry. It can lift off.

The weapons plant was a terran structure in the StarCraft beta. It was cancelled before the game's full release.[4] It was later turned into the engineering bay.[5]

The engineering bay reappears in StarCraft II. It can no longer lift off.

In the Wings of Liberty single player campaign, the Hi-Sec Auto Tracking and Building Armor upgrades are not available, while the Neosteel Frame upgrade to bunkers is an upgrade purchased in the Hyperion's armory.

This all-in-one safety system automatically dispatches robotic drones to put out any fires and perform basic repairs on damaged structures. Although these drones are effective at doing basic repairs, they do not have a strong enough AI to perform the more delicate repairs needed to restore a structure past half life.[7]

All buildings will initiate auto-repairs when below 50% health, repairing them back to 50% health.

Increases the attack speed of all turrets by 25%.

Reduces the cooldown of Reapers KD8 Charge by 10. When Reapers are killed, they throw 8 grenades (1 under him and 7 around him) the killing unit.

Increases the movement speed of Reapers, and grants them the ability to fly for 10 seconds. Reapers are able to attack air units while flying.

Reduce Sentinel Missile Cooldown by 20 seconds. When killed the Widow Mine will launch 5 Sentinel Missiles at random nearby targets that deal 10 (+10 vs. shields) area damage.

Sentinel missile range is increased by 50%, and can burrow and unburrow much faster.

Hellbat movement speed is increased by 50%. When Hellbats are killed, they ignite the surrounding area. Enemies in the fire run around in fear for 3 seconds in radius 3.

Upgrades the damage dealt by Tychus and his Outlaws.

Upgrades the armor of Tychus and his Outlaws and increases their life by 10%.

Increases the attack speed of Tychus, Crooked Sam, and Sirius by 25%.

Increases the life of Blaze, Cannonball and Rattlesnake by 25%.

Calls down a Nuclear Strike at a target location. Nukes take 3 seconds to land, but they deal up to 1000 damage in a large area. Replaces Barrage.

Increases the attack damage by Dominion Troopers and Enthralled Zerg.

Increases the armor of Dominion Laborers and Troopers, Imperial ships, and Enthralled Zerg.

Laborers and Troopers are delivered directly to the Enlistment Center's Rally Points.

Increases the life and armor of Supply Bunkers, Missile Turrets and Earthsplitter Ordnance by +200 and +2 respectively.

Further increases the range of units within Supply Bunkers by 1.

Increases the range of the Earthsplitter Ordnance's Bombardment ability by 25.

As of patch 4.7.1, Neosteel Frame and Structure Armor were merged into an upgrade called Neosteel Armor.

The StarCraft II engineering bay was designed to be a more simple structure than its predecessor. It was decided to make it a grounded structure as per the belief that only unit-producing structures should be able to lift off.[8] 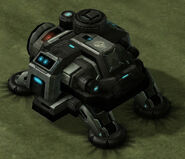 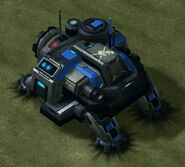 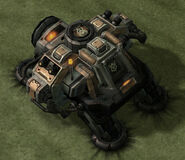 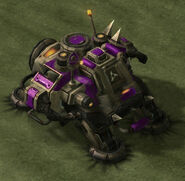 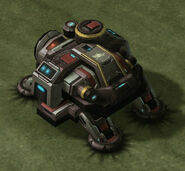 Royal Guard engineering bay
Add a photo to this gallery

Retrieved from "https://starcraft.fandom.com/wiki/Engineering_bay?oldid=357577"
Community content is available under CC-BY-SA unless otherwise noted.