The Executor is a high Khalai protoss Templar Caste rank. It is also used by the Tal'darim and Purifiers.

Among the Khalai/Daelaam, the term "executor" identifies the leader of the protoss Templar Caste. The highest ranking amongst the Templar is given the rank of executor. The seat of office was the Citadel of the Executor. Executors who have held this position include Zoranis, Adun,[1] Tassadar,[2] and Selendis.[3]

Protoss who are given this rank are sometimes referred to as a "high executor."[4]

The term can also refer to a protoss who is given command of a number of protoss forces (Koronis)[5] by another executor (Andraxxus).[6]

Other lower-ranking executors include Amur[3] and Damiarch.[7]

Some other factions, such as the Tal'darim, have their own executor(s).[8] Purifiers based off the personalities of past executors were still addressed by their model's rank,[9] though Talandar appeared to be able to achieve the rank.[10]

It is rare for executors to take to the field of battle personally. However, they are fitted with special armor should the need arise.[11]

An executor serves as the default announcer for protoss players in StarCraft II, and likewise serves as their structure portrait. While the standard executor portrait is a Templar, Purifier, Tal'darim, Ihan-rii, and xel'naga variants are available in Versus/Co-op Missions.

An executor decal is available in StarCraft II upon reaching level 28 with protoss. The decal is the outline of a mothership.[12] 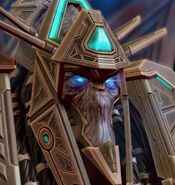 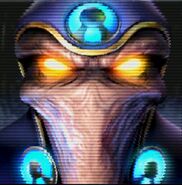