The zerg extractor is essentially a giant organ that sits atop a vespene geyser and packages the vespene gas into small fleshy sacs that can be easily carried by zerg drones to a nearby hatchery for absorption. Through this structure, the zerg convert raw vespene into a form that is more beneficial for their organic systems. The refined gas it produces becomes a necessity in the later evolutions of the zerg breeds. As the extractor lives off gas itself, it does not need to be built on an area already covered in creep.[1]

1
Drones may still retrieve gas from a depleted geyser, but the yield will be greatly reduced (to 2 per trip).

The extractor was modeled and designed by Maxx Marshal entirely in a single night. It was initially named the "gas sucker."[2]

per Structure Morph and Evolution Rate mastery point. Down to a minimum 12 (Co-op Abathur)

The extractor appears in StarCraft II. It functions almost identically to its predecessor. The extractor no longer yields any gas when it is depleted.

In Heart of the Swarm, there is a Kerrigan ability that turns them into an Automated Extractor. It is a tier 3 ability that makes it so that it doesn't require drones to mine vespene gas. There is also a tier 5 ability, Vespene Efficiency, that increases the vespene gas harvesting efficiency by 25%. Both of these abilities are passive.[3]

Extractors and automated extractors return 5 vespene gas a trip instead of 4.

In Co-op Missions, Dehaka primal hives can spawn Extractors with a different model.

The extractor went through only a couple revisions before being finalized. The first rendition was simply an adaptation of the original game's artwork to 3D. The main flaw of this first design was the complexity of the different shapes and colors, it looked too busy and was too visually distracting. The final revision simplified the building's distinct elements and unified the Extractor with the rest of the zerg structures.[4] 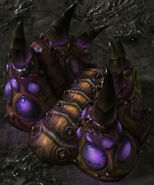 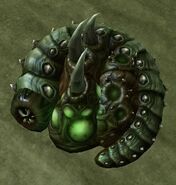