A factory is a terran production structure.

The factory is an automated terran structure which acts as the primary production center for vehicles,[1] structures,[2] and ammunition.[3]

The factory maintains first-class housing for the elite crews of tanks, walkers and the other mechanical units it produces. The factory walls are made of reinforced neosteel, making the structure one of the most survivable in any terran base. The factory contains heavily reinforced fuel supply reservoirs, as well as interior construction cranes to aid in the lifting and assembly of machinery, and ventral thrusters allowing it to liftoff.[4]

At the midpoint of the Second Great War, the research of Redell Quinton at Project Blackstone did away with the latrine housed within factories. This extra space gave factories the capacity to manufacture siege tanks with siege mode straight off of the factory line without the need for further facilities in the tech lab.[5]

The Dominion Special Forces utilize the R36-series of factories, which feature sturdier anchors, reinforced foundation, and a bulletproof coat of paint.[6]

In StarCraft, the factory is used to construct vultures, siege tanks and goliaths. It also has an optional machine shop upgrade to enhance vehicles' offensive weapons and speed.[1]

The factory can add a machine shop to itself, enabling it to produce siege tanks and upgrade tanks and vultures. In StarCraft: Brood War it also enables the research of Charon Boosters.

In StarCraft II, the factory is compatible with the tech lab and reactor, albeit not both simultaneously.

One additional attribute is that it is required to produce nuclear missiles at the ghost academy.

This structure can create a reactor.

This structure can create a tech lab.

Combines the tech lab and reactor into one add-on.[7]

Protoss plasma shields have finally given us the ability to fit the tech lab and the reactor into a single structure add-on. This new add-on, known as the tech reactor, replaces the old tech lab and reactor add-ons, and allows us to train two of any unit type simultaneously.

This all-in-one safety system automatically dispatches robotic drones to put out any fires and perform basic repairs on damaged structures. Although these drones are effective at doing basic repairs, they do not have a strong enough AI to perform the more delicate repairs needed to restore a structure past half life.[8]

In Co-op Missions, Jim Raynor gains the following upgrades to the factory.

Raynor's infantry units are able to use Improved Stim. (Increases movement and attack speeds by 75% for 15 seconds at the cost of 5 health.)

Barracks, factory, and starport units are delivered directly to the structure's Rally Point via drop pod.

In Co-op Missions, Rory Swann's primary structure is the factory, and he foregoes the gas cost. In addition, Swann gains the following upgrades to the factory.

Swann builds SCV's, vehicles and starships 20% faster than other Commanders. Factories and armories does not cost vespene gas.

Combines tech lab and reactor add-ons, allowing two units of any type to be trained simultaneously.

The balance between team color and metal was the focus of factory development in StarCraft II. During development, artist Phill Gonzales hid posters of "fat chicks" on the back wall of the factory. However, they were spotted during a Q&A session and he was forced to remove them.[9]

As of April 2012, Blizzard was experimenting with a wide range of new terran units for Heart of the Swarm. Many of these originated from the factory, the structure being a "little light" on its unit options.[10]

Factories appear in the background of the map Braxis Holdout in Heroes of the Storm. After the first zerg wave, they become infested factories.[11] 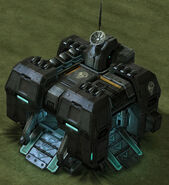 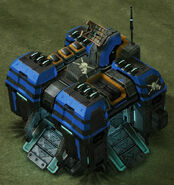 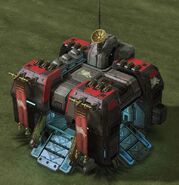 Royal Guard factory
Add a photo to this gallery

Retrieved from "https://starcraft.fandom.com/wiki/Factory?oldid=356706"
Community content is available under CC-BY-SA unless otherwise noted.