Failoc-alypse is a flash minigame found on the Blizzard Entertainment website, appearing as BlizzCon 2009 tickets were being sold (out). It is a side-scrolling shooter. The music played in the background strongly resembles Warcraft II themes.

The player can select one of three characters to use: Jim Raynor (as a light infantry or ranger), a female draenei death knight or a male witch doctor. The characters all have ranged weapons. NPCs appear in the background, including the Lich King. 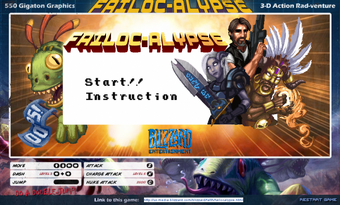 The object of the game is to kill failocs as they rush past BlizzCon. Killing fail-ocs grants XP (gaining levels) and sometimes money in bags. The money can be used to buy nukes, which are dropped or coordinated by Grunty the murloc marine. (Grunty is not harmed by the attack.)

At level three the character gains the ability to dash, at level 5 they gain a special "charge" attack (in Raynor's case, he charges his rifle with energy, causing a massive red blast to travel across the screen, killing only failocs on the same horizontal axis as Raynor). At level 10, the character can even double jump. The character can fire more shots with levels.

As the game progresses the failocs become faster and move in larger numbers.

A special, particularly large and tough "boss" murloc exists. The boss has no attack. It flickers red as it very slowly moves across the screen. It appears at level 100 with a red health bar over its head and takes over 32 nukes to destroy (a regular shot does as much as a nuke). The game continues after its death (or after it makes it to BlizzCon).

Retrieved from "https://starcraft.fandom.com/wiki/Failoc-alypse?oldid=205420"
Community content is available under CC-BY-SA unless otherwise noted.