Legacy of the Void
Into the Void

2
The flying locust is a zerg variant strain of the locust that appears in Heart of the Swarm. It is spawned by the carrion swarm host strain. The flying locusts are faster and deal 50% more damage than regular locusts, but have 25% less life.[1]

In Legacy of the Void, locusts in multiplayer default as flying locusts. They have the swoop ability, where they home in on a ground unit and become ground units.

Orders flying locust to land at target location, so it may attack enemies.

Increases the lifespan of locusts by 10 seconds (to 25 seconds). This upgrade was removed from HotS in the April 2015 update, as the locust's base lifespan was increased to 25 seconds. [2]

This upgrade is not present in Legacy of the Void.[3]

Allows locusts spawned by swarm hosts to fly. Flying locusts can use Swoop to land and attack units.

Automatically available in Legacy of the Void.

Heart of the Swarm Campaign[]

In the Heart of the Swarm campaign, flying locusts are used by the carrion strain of the swarm host. These locusts still need an upgrade in order to attack air.

Locusts can attack both ground and air units. 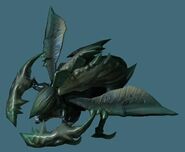 It was named "harpy" during development.[4]