The gateway is a protoss structure used to transport infantry.

Gateways create a swirling rift that warps in protoss warriors from their home territories to the location of the military colony housing the gateway. A phenomenal amount of energy is required for this operation and, as with most protoss structures, a gateway can only function if it is powered by the psionic matrix formed by a network of pylons.[1] Gateways can summon protoss warriors from light-years away, and the travel time is measured in mere seconds.[2]

Gateways are an inferior form of the xel'naga warp gate, the technology was upgraded, based on the ancient warp gate technology, following the Brood War, giving the protoss access to warp gates of their own. The protoss barely understand the technology behind it however, as it has been reverse engineered from ancient xel'naga structures found on both Aiur and Shakuras.[1]

Deactivating a gate traps objects in mid-transport within the gate's energy matrix. Trapped travelers may be aware of what has happened. The suspended transport is completed upon gate reactivation.[3]

Tal'darim gateways can warp warriors from much further away than their Khalai counterparts. However, they are occasionally torn apart en route. The Ihan-rii utilize gateways that emit high amounts of dangerous void energy.[4]

Gateways warp-in protoss infantry such as the Zealot.

The gateway is much the same in StarCraft II, though can now transform into a warp gate.

Enables gateways to transform into warp gates. This ability is autocast.

A warp gate can warp-in protoss forces to any part of the battlefield that lies within the psionic matrix, created by pylons and by the very mobile warp prism. This enables protoss forces to be transported directly to the front lines, to beleaguered outposts, or even to launch ambushes.[1] Units can be warped-in on a cliff if the player can see the top of the cliff.[5] Warp-in does not function on allied or enemy psionic matrices.[6]

In Wings of Liberty, Heart of the Swarm and Co-op Missions, forces warp-in over 5 seconds, gaining hit points over time. If the units fall outside the psionic matrix during this process (for instance, if the supporting pylon or warp prism is destroyed) then they are destroyed.[7] In Legacy of the Void, the warp-in time is increased to 16 seconds, unless the pylon is in range of a nexus or gateway/warp gate, in which case the time is 2 seconds.[8]

If a warp prism is supporting the warp-in and it is destroyed, the warp-in is canceled and the player gets back the resources.[9]

The warp gate enters a cooldown before another unit may be warped in. The interval is equivalent to ten seconds less than the last unit's gateway build time.

The warp gate does not have the ability to queue units regularly, but can be quickly transformed back into a gateway. All warp gates can be selected by pushing the "W" key.

Putting a pylon in the central map area, known as "proxy pylon," in order to warp-in units nearer the enemy base is a commonly used strategy.[10]

To use warp-in, the player would first:

If the player has any idle warp gates, an icon will display showing how many are idle.

In Legacy of the Void, units become more vulnerable during the warp-in phase[11] taking 200% extra damage.[12] The goal of this change was to strengthen harassing tactics versus protoss, while also making a protoss player's army and warp-in positioning a more tactical decision.[11]

When playing the single-player campaign in Legacy of the Void on Normal or Casual difficulty, warp gates have the passive ability Superior Warp Gates, allowing them to generate up to three charges over time. Warping in a unit consumes a charge, at which point the warp gate will generate a new charge, the time needed differing based on the unit warped in.

Zeratul has access to a variant of the gateway named the xel'naga passageway, which lacks the ability to transform into a warp gate.

Allows Vorazun to warp in dark archons from the gateway. Requires a dark shrine.

Powerful attack caster. Can use Confuse and Mind Control abilities.

Can attack ground and air units.

Allows Alarak to warp in ascendants from the gateway. Requires a ascendant archives.

The gateway underwent a makeover during development, but the final result was "too mighty." It was thus reverted to the form currently seen.[13]

When Wings of Liberty was first released, a tactic in protoss vs. protoss games was the 4-gate rush. Alterations were made and the technique became less viable.[14]

Visually modified warp gates appeared in early builds of Heroes of the Storm.[15]

A gateway (or similar structure) appears in the Blizzard World map in Overwatch. It forms part of the "Journey to Aiur" attraction.

The gateway in the StarCraft beta

Early image of the warp gate 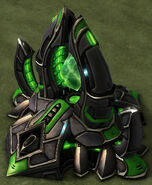 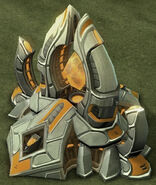