Start a Wiki
watch 02:35
The Loop (Games)
Do you like this video?
"Whenever I see a world untouched by war, a world of innocence, a world of lush forests and clear rivers. (pause) I really just wanna nuke the crap out of it!"

Ghosts are feared terran covert operatives. They are known for their skill, psionic powers, and ability to cloak.[2]

Ghosts take up two slots in a bunker. They have a Hold Fire command, enabling them to hide their presence even when hostile units approach.

Ghosts make good counters against ravens, mutalisks, infestors, and high templar, but are weak against banshees, marauders, zerglings, stalkers, and zealots. They can also be used for mid game mineral line harassment and damaging biological units. Their EMP may be used to severely weaken protoss forces and spellcasters, and reveals cloaked units such as observers and dark templar.

Ghosts can drop nukes very quickly. When backed up by medivac dropships, they can be moved from one strike zone to another, and heal the cloaked ghost whenever it gets attacked.[3]

In Patch 3.0, the Snipe ability is renamed "Steady Targeting" and deals 170 damage to a target biological unit, ignoring armor. This ability has a channeling time of 1.43 seconds, and will be cancelled if the ghost takes damage during this time. Unlike "Snipe," "Steady Targeting" cannot be queued to multiple targets.

In Patch 4.0, cloak became initially available to ghosts, and the Moebius Reactor upgrade was returned to them. In Patch 4.10, ghosts were given the Enhanced Shockwave upgrade, which increased the radius of the EMP ability.

After carefully aiming for 1.43 seconds while not taking damage, the Ghost fires a sniper round dealing 170 damage. Ignores armor. Can only target biological units.

Drains 100 shields from protoss units and drains 100 energy[4] from units in the area of effect, including friendly units. Shield upgrades have no effect.

In the Wings of Liberty single-player campaign, ghosts do not have the EMP ability. Ghosts are an alternative to spectres and are unlocked by playing the mission "Ghost of a Chance," available after Nova offered Raynor's Raiders the technology necessary to train them.[7]

Deals 25 damage + 25 vs psionic to a biological ground or air unit, ignoring armor.


This ability is only available in Wings of Liberty campaign; its Versus-mode version was replaced with Steady Targeting in Legacy of the Void.

Defenders of Man ghosts can detect in front of them and will use EMP if Nova is within the area. They also have ionic force field.

Provides the Ghost with a shield that reduces incoming damage until 50 total damage is absorbed. Shield lasts for 20 seconds.

The following upgrade was removed in Patch 4.1.4:

Increases the ghost's starting energy by 25.

Ghosts used to possess these abilities.

This attack, which can only target biological units,[11] deals 20 damage + 80 damage vs psionic opponents.[12] This ability used to be known as Snipe.[13]

Ghosts were also upgradable with the Full-Bore Canister Ammo upgrade in the single player campaign, which gave ghosts +2 damage against light units. Only the upgrade remains within the editor. The icon texture also remains but is unused, as a button for the upgrade was never made.[17] The ghost model has an unused animation for using a psi blade.[18]

In Legacy of the Void, ghosts gained an anti-armor drone ability. The ghost deploys a flying, destructible drone that channels a beam onto a single target, reducing its armor by 3.[1] This ability was removed in the final version of the game. 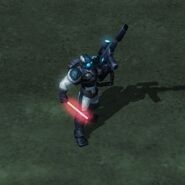 Ghost with a psi-blade (scrapped) 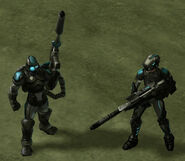 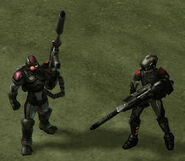 Retrieved from "https://starcraft.fandom.com/wiki/Ghost_(StarCraft_II)?oldid=362540"
Community content is available under CC-BY-SA unless otherwise noted.