Edit
watch 02:46
The Quarry - The Loop
Do you like this video?
Play Sound
"Somebody call for an exterminator?"

The unit was voiced by Chris Metzen.[2]

Ghosts are support units. Their attack and health are unremarkable for their cost. Their weapons deal concussive damage, which is ineffective against large units (e.g. siege tanks and ultralisks) unless massed, which is usually unfeasible due to their high tech position, cost and build time. Ghosts are a poor choice for large-scale combat due to their expensive cost and fragility to many attacks and spells such as spawn broodling, psionic storm and irradiation. Ghosts are also fairly slow which leaves them vulnerable to units like vultures and mutalisks.

Ghosts are best used for their abilities. Their lockdown ability, while micro-intensive, is devastating to mechanical and robotic units especially battlecruisers and carriers.

Defensively, dark templar make good counters against ghosts, especially when they attempt to use the nuclear missile ability.

The ghost also has its own death sound that is in the game data, however it is not implemented into the gameplay. Instead, a recycled and slightly altered marine death sound is used.

Ghosts become available in to the player in the campaign in "The Big Push" in Episode 1 and in "Assault on Korhal" in Episode V, though the player uses them in "The Dylarian Shipyards."

A ghost launches and "aims" the nuclear missile at a targeted location. The missile arrives 14 seconds after. The ghost must aim for the entire duration; if the ghost takes any other action, or the ghost is killed, or the missile is cancelled, the launch is aborted and the missile is wasted. 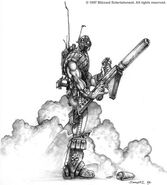