Edit
watch 02:34
Fire Emblem Warriors: Three Hopes - The Loop
Do you like this video?
Play Sound
"You think your college years were stressful? Ghost academy classes are held next to a nuclear missile silo."

See below
The ghost academy is a terran structure in StarCraft II. It is required for the production of ghosts and with a factory can produce nukes.

As part of the overhaul of the Ghost Program shortly after founding the Terran Dominion, Emperor Arcturus Mengsk ordered the construction of dedicated ghost academies with attached nuclear silos. However, these academies had an issue where radiation from the nuclear silos would leak into the nearby training areas. Newer designs fixed this issue.[1]

Arms the silo with a tactical nuke.

This all-in-one safety system automatically dispatches robotic drones to put out any fires and perform basic repairs on damaged structures. Although these drones are effective at doing basic repairs, they do not have a strong enough AI to perform the more delicate repairs needed to restore a structure past half life.[2]

In Nova Covert Ops, the ghost academy automatically produces nuclear missiles for no cost over a period of five minutes.[3]

The ghost academy can be build by Nova in Co-op Missions. They research upgrades for Nova (ghost upgrades are researched at the tech lab) and allow her to train spec ops ghosts. Nova automatically begins every mission with a ghost academy, but if it is destroyed can build another as a normal structure. She is otherwise limited to a single academy at a time.[4]

Tychus Findlay uses a variant of the ghost academy named the fixers' safehouse, which lets him build and upgrade Vega, Nux, and Lt. Nikara.[5]

Arcturus Mengsk can build a variant of the ghost academy named the royal academy. This has upgrades for his infantry Royal Guard, lets him build Emperor's Shadows, and will automatically product tactical missiles.[6]

Nova becomes a detector and reveals cloaked and burrowed units in her sight radius. Allows Nova to see enemy units within 20 radius in the fog of war.

Nova recovers 25 energy when killing an enemy unit with Snipe.

The ghost academy uses the former shadow ops render. It was capable of flying in early versions of the game, but this was later removed, as it was decided that only unit-producing structures should be capable of doing so.[7] Such a technique unbalanced the ghost academy in multiplayer, as players could move it to an obscure corner of the map and nuke the enemy at will.[8]

Factories appear in the background of the map Warhead Junction in Heroes of the Storm.[9]

A ghost academy features as an attraction in the Blizzard World map in Overwatch. 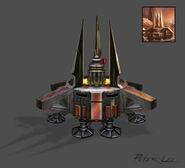