Edit
watch 02:52
Roblox: DeepWoken - The Loop
Do you like this video?
Play Sound
"Glacius facility. Within lies the greatest weaponry the empire ever developed."

Glacius Facility was a protoss Khalai Caste research base on the planet Glacius. Within it the greatest weapons of the Protoss Empire were developed. It was the site of the Purifier revival program, which was made to create a new generation of Purifiers.[1] The facility was defended by a series of large cannons, as well as a series of sentry and warp prism defenses in its interior. 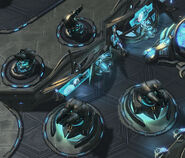