8
The guardian is a zerg air unit in StarCraft.

The guardian is converted from an existing mutalisk. It has an anti-ground attack that out-ranges almost all ground-to-air weapons, and in large groups can be particularly devastating as a bomber unit. While the guardian has a respectable attack of 20 (26 when fully upgraded), it has no defense against enemy air units and is vulnerable to ground-to-air units when on the run. The slow speed of the guardian also renders it vulnerable to area-of-effect spells such as psionic storm and irradiate, or long range anti-air units.

Mutalisks morphing into guardians become available to the player in the campaign with the mission "The Dark Templar" in Episode II and "The Kel-Morian Combine" in Episode VI.

Causes mutalisk to morph into a guardian.

+1 bonus to armor per level for overlords, mutalisks, guardians, devourers, scourge and queen.

During development, scourges (or "avengers" as they were then known) emerged from destroyed guardians.[1] 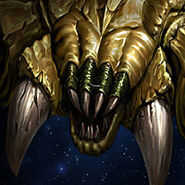