Harvest of Screams is the first mission of the Kaldir story in the Heart of the Swarm campaign.[1]

Broodmother Nafash had traveled here to create stronger strains. Sarah Kerrigan and a small number of zerglings landed on the moon in order to reclaim the Nafash Brood. Kerrigan discovered feral roaches which she brought under her control,[2] and encountered hostile ursadons.[3]

The moon was constantly struck by cold windstorms,[2] which would freeze the zerg and protoss in place[4] but had no effect on the ursadons. As a result, Kerrigan wished to take essence from a pair of ursadon matriarchs.[3]

The zerg encountered Nafash's corpse and found that the protoss had slain her. The Executor in charge, upon noting the presence of Kerrigan, attempted to warn Shakuras.[2] The protoss remarked on Kerrigan's weakened state.[5] Unable to reach the far-off Nerazim homeworld with the Khala, he instead used psi-link spires. Kerrigan tasked her forces to destroy these spires before they could be activated.[2] If the player collects the native essence, they can take advantage of the cold weather by attacking when the protoss are frozen, bypassing defenders.[6]

Kerrigan destroyed the spire at the three protoss bases[7] prompting the protoss to retreat. Kerrigan then ordered her forces to finish off the protoss before they could travel directly to Shakuras and get their warning off.[2]

As the player moves through the first part of the level, they will find feral roaches encased in ice that thaw under the player's command when they approach. Ursadons regularly attack, but can be killed instantly with Kerrigan's Kinetic Grip. Partway through this part of the stage the player's units will be frozen in place by a flash freeze storm, which will take several seconds to pass. After the first storm passes an ursadon matriarch approaches, killing it and the normal ursadons with it will assimilate their essence into the swarm, making them immune to the storm's immobilizing effects. After the matriarch is slain, Kerrigan will find Nafash's hive cluster and take control of it, alerting the protoss to her presence. The mission objective is now to destroy the protoss psi-link spires.

Throughout the rest of the mission, flash freeze storms will occur regularly. When they hit the protoss will be completely helpless for its duration, making it the optimal time to attack. However, while they can move in the storm, the player's units will experienced decreased vision radius. As optional objectives the player can kill two additional ursadon matriarchs, which will remove this penalty and award two bonus Kerrigan levels. Between storms the protoss will attack the player's base. Kerrigan's Kinetic Grip is useful for killing archons and high templar before they can decimate the player's rank-and-file zerg. The player will also be attacked by handfuls of ursadons during flash freeze storms.

The first spire is directly north-east of the player's starting base, and is guarded by a light garrison. The player can destroy it early on and seize a nearby mineral patch for expansion. With two bases mining, the player can take their time building up their forces and defending while waiting for the flash freeze storms, then moving out in number and destroying the protoss while they lay defenseless. The two western psi-link spires are much more heavily guarded and will need a larger force. The player should move out as the storm approaches, then retreat as they end and return to their base to defend it. As long as the player keeps their base well-defended and is patient, the mission is not very difficult.

Getting the achievements Storm Chaser and Psi-Lence is Golden can be trickier, however. While Storm Chaser can be done with simple rush tactics, Psi-Lence is Golden will require you to use either Raptors or Hunter banelings. Also, Psi-Lense is Golden requires you to both kill all of the ursadons and the psi-link spires within the time limit. Mutalisks are another option that can work for this, provided they are using the Sundering Glaive upgrade. 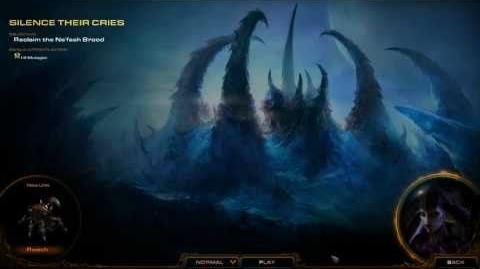