Start a Wiki
watch 01:50
The Loop (Games)
Do you like this video?
"The Hive is the focal point of the Swarm, the pinnacle of the species' millennia-spanning evolution. For zerg units, the Hive is home...and nothing says "home" like bubbling lava and black volcanic rock."

The hive is the primary structure of the zerg[1] and unlocks the final stages of their evolution.

Protected by a dense exoskeleton and granted full access to the Overmind's pool of knowledge, the hive continues to provide the same functionality that it has since it was a hatchery (birthing larvae, maintaining creep, and digesting minerals/gas). Once the hive is present, the being commanding it has the potential to unleash the full fury of the zerg.[2] The genetic model for a hive is extremely complex, and would be indecipherable by any terran scientist.[3] When under attack, hives can harden their hull with bony protrusions, allowing it to shrug off weaker strikes.[4]

During the Great War and Brood War, the Zerg Swarm could deploy a "Char hive." This hive glowed by the perpetual heat it generated, and while it was not so hot that melee attackers would be damaged, the drones and larvae within it were able to take advantage of the warmth it provided on the colder planets of the Koprulu sector.[5]

In some builds of the StarCraft beta, the hive was a name given to the structure that would become the queen's nest.[6]

per Structure Morph and Evolution Rate mastery point. Down to a minimum 24 (Abathur)

None (Co-op Kerrigan and Zagara)

The hive reappears in StarCraft II. The hive can set two rally points, one ("Y") for most units and one ("G") for drones. The queen does not get a rally point.

Each individual egg can be separately rallied; this overrides rally points set for the hive.[7]

The overlord can transport units.

This upgrade is removed in Legacy of the Void. Overlords must now be upgraded individually.

Sarah Kerrigan, Zagara and Abathur use hive with tier 3 primary structure wich can create larvas and generate creep. Kerrigan and Zagara can create queens after morph spawning pool. Abathur can initially create swarm queens instead of standart queens and can be upgraded to create two swarm queens simultaneously.

Allows hatcheries, lairs, and hives, to mutate two swarm queens at once.

The hive for StarCraft II was based off the lair in StarCraft, in order to make it look more 'evil'. There were also plans to change the middle maw portion more gradually as it evolved from a hatchery, but there wasn't enough time to do so.[10] 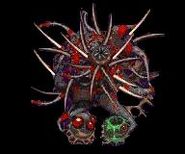 The hive in the StarCraft alpha 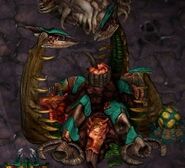 The hive in StarCraft: Remastered

Classic hive
Add a photo to this gallery

Retrieved from "https://starcraft.fandom.com/wiki/Hive?oldid=366521"
Community content is available under CC-BY-SA unless otherwise noted.