Edit
watch 02:46
The Quarry - The Loop
Do you like this video?
Play Sound
"Sir, if I'm reading this right, that hybrid is virtually indestructible, don't try and fight it - just get out of there!"

Will respawn if killed.
The Castanar hybrid was a powerful hybrid reaver created and imprisoned at a secret Dominion facility at Castanar.[1]

This hybrid was accidentally released by Raynor's Raiders when they destroyed the facility's fusion reactor. Upon awakening, it went on a rampage throughout the facility, killing terrans (of both factions), zerg and protoss alike. Unable to destroy the hybrid, Jim Raynor and his men had no choice but to run for their lives. Hoping to delay the hybrid, Raynor activated a warbot and sent it against the monster. However, the hybrid quickly destroyed the warbot. The Raiders managed to escape in a Dominion Hercules dropship, prompting the hybrid to "scream" as they flew off.[1]

Its scream was so powerful that it was felt by telepaths aboard Hyperion.[2]

During its rampage, it only uses Consume DNA on the protoss and zerg it encounters.[1] 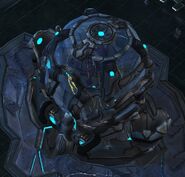 The hybrid in containment 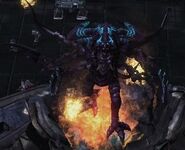 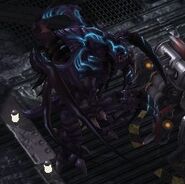 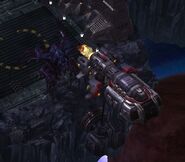 The hybrid chases the Raiders

The rest of the installation equipment details are rather vague/fuzzy to make out: