View source
watch 02:56
Raise a Floppa - The Loop
Do you like this video?
Play Sound
"The only good hydralisk is one charred to a smoldering crisp."

The hydralisk is the zerg basic front-line creature, forming the backbone of their onslaughts with its resistant carapace and ranged spine attack.

The hydralisk is a zerg evolution of the slothien, combined with seven or eight distinct and diverse organism strains.[1] While slothiens were peaceful herbivores, the hydralisk is noted as being one of the most fierce and sadistic of the zerg strains.[2] Hydralisks are a versatile combat strain, and form the backbone of the Swarm,[3] acting as shock troops.[4] To terrans, hydralisks symbolize the Swarm's power more than any other strain.[3]

"Punching them on the nose will chase them away.
Nope! Tried it!"

Despite their relatively sluggish nature, hydralisks can climb vertical surfaces[9] and continued evolution of the strain through muscular augmentation through genetic manipulation has resulted in faster hydralisks, increasing their locomotion by up to 25%, both on and off creep.[10] Hydralisks muscles and tendons are strong and impenetrable by a number of weapons, but have the flexibility of leather.[11] Dominion Intelligence Section published reports that hydralisks had a weak spot in their head, though many marines attest to such a weak spot being the creature's chest.[10]

The hydralisk's endocrine and adrenal were altered as part of their evolution. The chemicals pumped into their bloodstream effectively force them to live in a perpetual "fight response." Some hydralisk variants seem to be able to overcharge their specialized endocrine system, substantially increasing aggression and savagery.[12] As the backbone of the Swarm, hydralisks are subject to constant evolutionary improvement.[10]

Prior to the beginning of the Brood War, hydralisks gained the ability to mutate into lurkers.[13] Hydralisks changed drastically in the transition to the Second Great War, and evolved more bone claws as well as a bulkier figure.[10] During the Second Great War, the ability of hydralisks to metamorphose into lurkers was temporarily lost. The Leviathan Brood was the exception, due to the inherent link between hydralisks and lurkers within the brood.[8] After the End War, some hydralisks were given the essence of the noxious strain of ultralisks, giving them new toxic abilities and changing their appearance.[14]

By the Battle of Adena, the hydralisks of the Niadra Brood possessed a different physique from their Swarm counterparts, being longer, slimmer, and possessing shorter, less curved scythes. They fired their spikes from their hands rather than their upper carapace plates.[15]

"Shoot 'em in the chest, you idiots."

Since hydralisks move relatively slowly over open terrain,[16] it is common for hydralisks to burrow and await their prey to enter killing range before attacking,[17] destroying their enemies in a deadly crossfire.[18] Current terran tactics for dealing with the creatures stress the need for siege tank support,[18] and are only to be approached by trained soldiers.[3]

Hydralisks are sometimes supported by infestors.[19]

"Can't block these with your rifles. Lenny tried, (RIP Lenny.)"

Hydralisks may attack directly with tri-bladed scythes[17][12] Grown from the relatively soft ribs of the slothien, they were hardened through genetic manipulation.[12] The high-density bone blades are connected to a set of fast-twitching, striated muscles, which allow for great striking power with a modest range of motion, deadly even in restricted mobility scenarios such as tight corridors or trenches.[12] More commonly though, hydralisks strike from a distance with volleys of armor-piercing spines,[17] 30cm in length,[20] and is their deadlier form of attack.[2] Hundreds of these spines are stored in the upper carapace plates[2] and covered by flaps. The flaps fold back before the spines fire,[21] and the hydralisk's head is dipped beforehand.[4] These physical signs give a hydralisk's foes a few seconds warning before they launch their volley.[9]

The hydralisk has 4,000 muscles, compared to a terran's 629,[18] and a portion of these may be used to launch the spines with enough force to penetrate 2 cm. of neosteel[2] at a range of over 300 meters[20] or even half a kilometer[3] at a velocity greater than that of the C-20A rifle,[20] moving at near hypersonic speeds.[4] The spines were evolved from the slothien's defensive urticating hairs;[18] they may be "grooved" for increased range[2] and are highly poisonous.[12][22][23]

The hydralisk may also use its jaw as a weapon. With an estimated bite force of 5000 pounds per square inch, the hydralisk's jaw can easily cut through flesh, bone, and even neosteel.[12]

Hydralisks have also demonstrated the ability to spread a webbing that encases and constricts a target, allowing them to be restrained and transported for infestation.[24]

The first recorded encounter between terrans and hydralisks was aboard a cargo vessel. The hydralisk was recorded by the derelict ship's security cameras.[16] Since then, hydralisks have established themselves in terran culture to a notable extent. Sometimes colloquially called "hydras,"[25] hydralisk skulls have been mounted akin to trophies in Joeyray's Bar[26] and on an ore loader on Sorona.[27] The Annual Hydralisk Derby has also become an established event.[28]

Project Tamed was a Dominion project that attempted to use controlled hydralisks as living weapons, but it backfired, as the control was feigned, and they had in fact never been removed from the control of the Queen of Blades.[3]

Hydralisks were featured as a player unit in StarCraft: Ghost, in addition to acting as enemies. Hydralisks maintained their StarCraft abilities but also gained a powerful claw attack.[29] Their poison quill attack interfered with terran vision.[30] They moved more slowly than zerglings.[31]

In Invasion mode, transforming a zergling into a hydralisk cost one point.[31]

The Hunter Killer strain of hydralisk can be summoned by Zagara in Heroes of the Storm.[32]

Hydralisks can be spawned on the map Braxis Holdout, and are part of the zerg attack waves that are sent against opponents.[32]

The hydralisk appears as an Easter egg unit in Warcraft III and its expansion, The Frozen Throne.

A hydralisk skull can be found in the second[33] and fifth acts[34] of Diablo III. 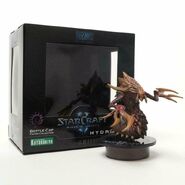 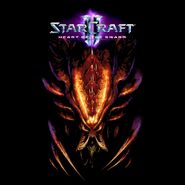