Edit
watch 02:30
Dead Cells Final DLC - The Loop
Do you like this video?
Play Sound

Lurker (BW only)
The hydralisk is a zerg ranged unit in StarCraft.

Hydralisks have a single ranged attack, unlike in the Amerigo cinematic where they may melee attack. They are the only zerg ground unit able to hit air targets, making them one of the most important zerg units in the whole game. Hydralisk dens are required to spawn them from larvae.

Hydralisks are cheap enough to be mass-produced in a short period of time. Although hydralisks can deal huge damage in large groups, there are numerous counters; terrans benefit from large numbers of siege tanks, and marines paired with medics. Protoss can effectively counter mass hydralisks with reavers with ground support and high templar using Psionic Storm. In competitive StarCraft, hydralisks are most often used against the protoss race (e.g. the 3 hatch hydra opening) because it is an effective counter to many protoss units despite the easy counters against them. This is especially true if the zerg player is skilled at micromanaging his hydralisks. Against terrans, hydralisks do not see much usage because professional players are too skilled with their marines, medics, and siege tanks which are also natural counters to the hydralisk. In zerg vs zerg competitive play, hydralisks are virtually unseen as are most zerg units because the game is usually dominated by zerglings and mutalisks.

Hydralisks become available to the player in the campaign with the mission "Among the Ruins" in Episode II and "Vile Disruption" in Episode VI.

Allows a hydralisk to morph into a lurker. The control cost increases to 2.

The hydralisk was effectively the first zerg unit designed, and became the basis for the look and feel of the zerg as a whole. It was originally a melee unit, but developed into a ranged unit that shot spines.[2]

Some of the hydralisk sound effects were made using the voice of Tracy W. Bush.[3] 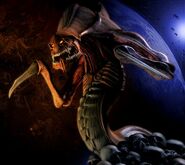 The hydralisk in StarCraft

The hydralisk in StarCraft: Remastered

The hydralisk in StarCraft: Remastered 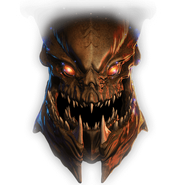 Hydralisk on the campaign select screen in StarCraft: Remastered