Hydralisks gain greater speed from traveling on creep than most zerg ground units
The hydralisk is a zerg unit in StarCraft II.

Hydralisks counter mutalisks and banshees. Hydralisks in large numbers also counter phoenixes. They are, however, relatively fragile and are inefficient against large numbers of armored units. Hydralisks are also weak to units that do splash damage, such as siege tanks, hellions, hellbats, banelings, lurkers, and colossi.

Hydralisks have a melee attack in addition to their normal ranged attack, but it does the same damage as the ranged attack.[1] The melee attack is not cosmetic, as it has the advantage of not triggering point defense drone lasers and not being affected by sentry's guardian shield.

With a lurker den constructed, hydralisks can morph into lurkers, becoming a powerful siege attacker.

Hydralisks work well paired with roaches, the hydralisks dealing damage while the roaches absorb it.[2] A combination of roaches and hydralisks can defeat a combo of zerglings and mutalisks.[3]

Hydralisks can excel against void rays, given the starship's weakness to mass units.[4] Burrowing for a short time will cause the void ray's attack to lose its charge, then resume attacking is the best tactic against void rays.

Increases hydralisk movement speed by 25% on and off creep.

In the Heart of the Swarm campaign, hydralisks are unlocked upon playing the mission "Shoot the Messenger." Hydralisks can transform into either lurkers or impalers after completing the appropriate evolution mission. Their visual design changes accordingly.

The hydralisk den and hydralisk strain are exclusive to Kerrigan in Co-op Missions. Kerrigan also has access to the lurker and lurker den. Additional upgrades for the hydralisk and lurker become available when Kerrigan reaches Level 6. Frenzy is also autocast.[5]

Zagara can deploy Hunter Killer hydralisks as a temporary summon from her hero unit.[6]

Dehaka has the ability to produce primal hydralisks, which can evolve into impalers or primal mutalisks.[7]

Stetmann has the ability to build mecha hydralisks, which specialize against air targets and can evolve into mecha lurkers.[8]

Mengsk can summon temporary enthralled hydralisks at the cost of Imperial Mandate as part of his Dogs of War calldown.[9]

The hydralisk can morph into a lurker, an anti-ground ambusher.

Hydralisks temporarily gains +50% attack speed. Can be set to autocast.

Increases hydralisks movement speed by 25% and attack range by 1.

The hydralisk's dance is based on Michael Jackson's Thriller.[10] 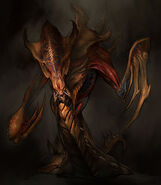 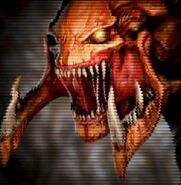