View source
watch 02:34
Fire Emblem Warriors: Three Hopes - The Loop
Do you like this video?
Play Sound
"We shall serve forever."

The immortal is a protoss cybernetic war machine.[1]

"When revered protoss heroes fall, their remains are transplanted into robotic exoskeletons. These heavily armed and shielded immortals are among the most loyal of warriors."

Immortals stem from dragoons. Their pilots live in a sterile nutrient solution saturated with microscopic machines, which helps preserve their mangled bodies. The machines repair aging tissue, destroy any foreign matter that might penetrate the cockpit (usually due to hull breaches) and regulate the pilot's heart rate, brain activity, and biological functions.[2] Immortals are some of the most advanced hardware ever devised by the protoss.[3] Upon transplantation, immortals are consecrated in the name of Adun, as he was the one who best understood the meaning of self-sacrifice.[4]

Immortals stand over twice as tall as a terran wearing CMC armor.[3] They are outfitted with two twin phase disruptors as their primary attack form; they give critical fire support to legions of zealots[1] against ground targets,[5] deployed when the protoss are faced with heavy enemy firepower.[6] These blasts can easily punch large holes in heavy plating, but their limited field of fire prevents Immortals from engaging aerial targets.[2] When deployed, immortals give critical support by eliminating enemy artillery and ranged attackers.[7]

Immortals are equipped with armor weave that mitigates impacts through energy dissipation.[3] Additionally, the hardened shields used by immortals are created by intertwining spectrums and wavelengths of varying intensity. Through this, these shields are incredibly dense, able to mitigate powerful impacts such as siege tank rounds or the blades of an ultralisk, through energy dissipation. When the remaining dragoons were turned into immortals, the protoss decided to outfit them with these shields in an attempt to further preserve their most ancient and venerable warriors.[2] Originally, the shields only activated when struck by powerful attacks, which left immortals more vulnerable to the pinprick attacks of lesser foes.[8] By 2505,[3] immortal shields were heavily reinforced,[9] making the immortal invulnerable to enemy attack for short periods of time.[10] These shields were impractical for mass production.[9]

The Ihan-rii created a variant of the immortal that served as a robotic sarcophagus for warriors who died honorably in battle, continuing to carry their remains into war.[4]

Historically, crippled veteran Templar could volunteer to continue serving by being transplanted into dragoon exoskeletons. This honored tradition was broken by the fall of Aiur when the shrine dedicated to dragoon creation was infested by the zerg. Following the Brood War, crippled templar were transplanted into the new immortal exoskeletons instead.[11] The first were in service by 2502.[12][13] The remaining dragoons were transformed into immortals.[1] As a result, immortals house some of the most skilled and venerable warriors of the protoss military.[3]

Ultimately, immortals are a dying breed. Soon, none will remain.[7] By 2506, only the most revered heroes of the Templar were allowed to become immortals, due to the resources required to produce them.[9] In the aftermath of the End War, Purifiers began to re-purpose the shells of fallen immortals into fully automated combat walkers.

After the End War, some fallen templar elected to use ancient exoskeletons to show their dedication to ideals that united the protoss in their times of trouble.[4]

Mastery: +1 per Combat Unit Life and Shield mastery point. Up to a maximum 130 (Co-op Karax)
50 (Co-op Fenix with Network Administrator)

225
Immortals dropped by warp prisms may conduct raids against enemy structures and expansions.

Immortals are a good counter against armored ground units, such as roaches and ravagers. If a zerg player is using these units in excess, immortals can be considered a core unit.[14]

The immortal gains a barrier which absorbs 100 damage before falling. Lasts 2 seconds. Automatically activates upon taking damage to shields or health.

Immortals are usable in the StarCraft II: Wings of Liberty protoss mini-campaign, available during and after the "A Sinister Turn" mission.[15]

In the single-player campaign, the player may choose between the immortal, the annihilator, and the vanguard for their robotic walker unit. The vanguard has superior attack power and the annihilator has a heavy-damage shadow cannon ability, while the base immortal has its Barrier ability for superior durability and tanking abilities.

The hardened shield trait is removed, replaced by a barrier ability.[16] In the campaign, the barrier initially absorbs only 100 damage, but lasts 10 seconds. Later, after "Brothers in Arms," barriers can absorb up to 200 damage. This makes the immortal the toughest of the three variants with an effective total health of 500 and the second toughest unit the protoss can field, only beaten by a mothership, and their hardened shields allow them to take on heavy terran armor such as siege tanks without trouble. However, note that the immortal has to survive the hit that finishes their normal shields to activate the barrier; if they take a single hit strong enough to burn through the rest of their shields and their full health the barrier will not activate in time, and they will be destroyed.

Artanis, Karax, and Fenix can build immortals in Co-op Missions. Artanis is able to upgrade his immortals from the start, while Karax unlocks immortal upgrades at Level 9 which includes the Shadow Cannon ability that hits both ground and air targets. Fenix unlocks the ability for his immortals be controlled by Taldarin at Level 5, allowing one of them to pull targets together and the researchable ability to store damage within a target that explodes out to surrounding enemies upon death.

Alarak can utilize the vanguard immortal variant. Zeratul can utilize a variant of the immortal named the xel'naga enforcer.

Valorous Inspirator: Increases the Barrier's absorbed damage from 100 to 200.

Increases the amount of damage absorbed by the Immortal's Barrier from 100 to 200.

Valorous Inspirator: Increases the Improved Barrier's absorbed damage from 200 to 400.

"The protoss immortal. This was a new unit. Everyone really loved the design of the protoss dragoon, and we removed it from the game in StarCraft II, but we wanted to carry some of that giant golden walker into the protoss army. It was a simple enough task of just adding a torso to it. The dragoon before was like a mechanical spider; this guy is like a mechanical centaur and he is just a ball whomper."

The immortal carried the "thematic spirit" of the dragoon from the original game from a development standpoint.[17] From a gameplay standpoint, immortals were conceived to act as "meat shields," as per its hardened shields[18] acting as a counter to siege tanks.[17] However, it was found that players used them more aggressively than initially conceived.[18]

The immortal's barrier ability was temporarily removed during development.[19] It received a buff during the Legacy of the Void beta in order to encourage warp prism drops.[14] The barrier originally gave the immortal 200 HP.[20] 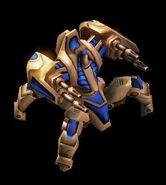 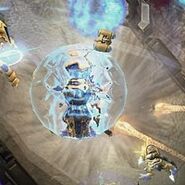