The infested factory builds quasi-mechanical infested terran units for Alexei Stukov. It is an infested version of the terran factory. It allows Stukov to construct infested siege tanks and infested diamondbacks. Unlike the terran factory, units are spawned based on charges, with the structure able to store five charges of a unit. The infested factory can construct the infested tech lab as an add-on, allowing for production of infested siege tanks as well as the purchase unit upgrades.

On the Braxis Holdout map of Heroes of the Storm, the factory in the center of the map will become an infested factory.[1] 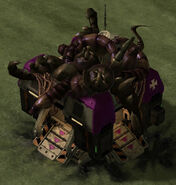 Infested factory in singleplayer campaign
Add a photo to this gallery

Retrieved from "https://starcraft.fandom.com/wiki/Infested_factory?oldid=345514"
Community content is available under CC-BY-SA unless otherwise noted.