Start a Wiki
watch 01:51
The Loop (Games)
Do you like this video?
"I chose him because he hates the Dominion and everything it stands for. But once I'm through with him, he'll be willing to die for it. Even kill for it."

- Dr. Stanley Burgess, one of the scientists responsible for Lim's neural resocialization.(src)

Jin-ho Lim was a terran. He had a relationship with Anna, whom he presented a wedding ring to. He was once opposed to the Terran Dominion, but was conscripted into the Dominion Marine Corps.

Lim once protested against the Terran Dominion alongside Anna. However, in a protest in New Canaan, Tyrador IX, Dominion marines opened fire on the protesters. Lim was arrested.

Lim was submitted to an especially intense form of neural resocialization by Dr. Stanley Burgess and conscripted into the Dominion Marine Corps Omega Squadron. After a surprisingly short amount of time, Lim's training was nearly complete. His final test was to execute Anna, who had also been apprehended and been sentenced to death. He killed her with little hesitation, but said goodbye to her after the execution.

Jin-ho Lim happily participated in a battle on Artika, where the Dominion was trying to take control of a xel'naga temple. As part of Charlie Squad, code named Death's Head 2-0-1, Private Lim was dropped into combat via dropship into a hot landing zone. There, the marines fought with the zerg. They were surprised by the arrival of a protoss fleet, which engaged theirs.

Lim's forces fought their way to the temple, losing their sergeant in the process. Lim quickly took on an unofficial leadership role. The remaining marines were ambushed by dark templar at the temple itself and, calling for a Scanner Sweep, were able to defeat them. However, their losses were high and only Lim survived to actually enter the temple, still intent on carrying out his mission.

Inside, he encountered a protoss zealot, Khastiana. Refusing to fight him, she freed his hidden memories from his resocialization. However, this simply made Lim angry, and he tearfully attacked her. Meanwhile, he didn't notice a scarred zergling, which jumped him from behind and stabbed him to death.[2]

Lim as a civilian 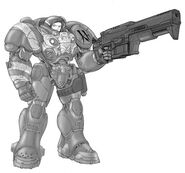 Lim as a marine
Add a photo to this gallery

Retrieved from "https://starcraft.fandom.com/wiki/Jin-ho_Lim?oldid=332510"
Community content is available under CC-BY-SA unless otherwise noted.