Edit
watch 02:56
Raise a Floppa - The Loop
Do you like this video?
Play Sound
"Lurker, attacks many foes while burrowed. Effective against light enemies."

The lurker is a burrowed anti-personnel zerg siege unit in StarCraft II.

Lurkers serve as siege and harassment units, capable of defending key locations and control points. They deal splash damage to large numbers of units making them useful against armies of clumped ground units such as marines.[1]

Lurkers were re-introduced in Legacy of the Void as a standard zerg unit in multiplayer. They are siege units that can attack in a line, and can defend critical points. Their Adaptive Talon upgrade allows them to burrow quicker, allowing them to be more mobile. To counter lurkers, detection is needed, and air units can pick off unsupported lurkers. Immortals, disruptors, and archons can break through lurker walls as protoss, while medivacs can help terran bio compositions navigate around them. Vipers and ravagers can help pick off burrowed lurkers vs zerg.

Reduces Lurker burrow time from 2 to 1.07 seconds and increase movement speed by 10%.

Increases the Lurker’s range from 8 to 10.

Orders selected units to ignore enemies that are within range.

Order selected units to fire at will.

Lurkers may attack only when burrowed.[2]

Does not require Burrow to be researched.

The lurker appears in the Heart of the Swarm single-player campaign as an evolution split from the hydralisk. It deals more damage and has more life than usual. Its counterpart is the impaler. Compared to the impaler, the lurker has lower range, but is more effective against zealots and marines due to its splash attacks.

Lurkers may attack only when burrowed.[2]

Does not require Burrow to be researched.

The lurker den and lurker strains can be used by Kerrigan in Co-op Missions, unlocked once she reaches Level 5. Like their versus equivalents, they can upgrade their range once Hive tech is unlocked, however co-op Lurkers do not get a movement/burrow upgrade.

Default and Kerrigan's lurker in co-op

Default lurker portrait in Heart of the Swarm 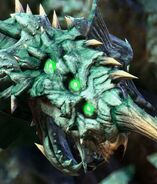