50
"The only thing you should feel when you shoot someone...is the recoil."

The marine is the basic infantry unit of terran forces.

The marine's ballistic alloy combat shield grants more HP, giving them more survivability against high-damage units. As long as the marine can survive a hit, a medivac dropship can quickly heal it.[1]

Marines excel against immortals, given their vulnerability to low-damage units.[2] However, they are weak against the colossi, due to splash damage from their thermal lances[3] and the high templar's area-of-effect psionic storm. Marines are also ineffective in small numbers against heavily armored units such as thors, ultralisks, carriers, and battlecruisers. Groups of siege tanks in siege mode can also easily wipe out large numbers of marines far from the latter's range while hellions and hellbats can do significant damage to marines due to their bonus to light units. Lurkers and banelings will also beat marines.

They are a crucial component of the MMM strategy, which is particularly effective against protoss zealot/stalker combo and massive zerg roach, ravager army. Large formations of marines can also easily counter void rays and mutalisks. Marines beat marauders and hydralisks in bigger numbers.

Increases the hit points of marines by 10. The marine model changes to have a shield attached to the left shoulderguard.[4] The M98 combat shield is composed of 30 mm of bonded carbide.[5]

Stimpacks provide a temporary boost to the marine's attack and movement speeds by dosing him with a mix of adrenaline, endorphins, and aggression enhancers.

This frenzied burst does come at the expense of the marine's health. Medical treatment is highly advisable after multiple uses.

Increases the hit points of marines by 10.

M98 Combat Shields are a vital upgrade for any marine fighting on the front line, 30mm of bonded carbide may not sound like much, but field tests have shown a full 25% increase in marine suitability when equipped with Combat shields.

Armor upgrades increase health of affected units by 5% per level.[6]

Increases marine's movement speed by 50% and attack speed by 75% for 15 seconds. Can be set to autocast.

In Nova Covert Ops, marines can equip one of various provided upgrades and abilities for each mission. They become available to the player in "Sudden Strike."

Increases unit's attack and movement speeds by 50% for 15 seconds and heals unit for 30 HP. Can be set to autocast.

Equips unit with a secondary attack that deals 20 damage every 30 seconds.

Early in development, the StarCraft II team experimented with changing the base tier 1 units for each race. This included replacing the frontline role of marines with the prison infantry guard, a much lighter armored terran infantry variant. However, this idea never made it past the concept art stage.[9]

Concept art exists for marine variants in StarCraft II (or possibly as separate units). These include a demolitions veteran, an anti-air veteran, and a heavy artillery veteran. Art likewise depicts marines equipped with a wrist cannon (or similar weapon) rather than the C-14 rifle.[10]

At BlizzCon 2007, marines had a bayonet attached to their rifles, but these disappeared from later versions of their model.[11] Marines also had different death sounds in 2007 and 2008.[12][13] Some marine quotes were updated or removed, including an unused line for stimpacks.[14]

Prior to eventually gaining 5 HP and 1 additional attack range in mid-2008, the Combat Shield upgrade increased marine HP by 15, and the U-238 Shells upgrade was still available.[15] At BlizzCon 2008, the Combat Shield upgrade doubled their HP to 80 and Stimpack was moved to the shadow ops, in an attempt to keep marines useful throughout a match.[16] 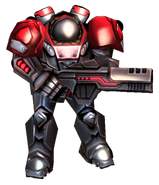 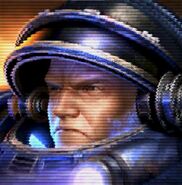 In the StarCraft II Map Editor one can find a marine with 3 different dances like the "Peanut Butter Jelly Time" and the moonwalk.[17]

It is voiced by Chris Metzen.

A mercenary skin is available in multiplayer and can be unlocked by reaching level 30 with terran.