Maw of the Void is a StarCraft II: Wings of Liberty mission. Raynor's Raiders collected the final piece of the Keystone on a Tal'darim-occupied xel'naga worldship.[1]

After the recovery of the fragment from Typhon XI, Raynor's Raiders discovered that the Moebius Foundation was owned by Crown Prince Valerian Mengsk, who secured Commander Jim Raynor's cooperation for the coming assault on Char to make Sarah Kerrigan human again.[2]

The Foundation located the final piece on a derelict xel'naga worldship. Valerian warned the Raiders of the Tal'darim presence and rip-field generators; Tychus Findlay was against accepting the risky mission but was overruled by Raynor. The prince aided the rebels by transferring the schematics for the Minotaur-class battlecruiser.[1]

The component's vault was located within a Tal'darim base deep inside an overlapping zone of rip-fields. The protoss survived as plasma shields negated the rip-fields' effects. The terran attack was spearheaded by a battlecruiser squadron; the ships destroyed an outlying rip-field generator and cleared an area for a forward base.

As the Raiders destroyed more rip-field generators, the Raiders discovered prisons holding dark templar. The dark templar appealed to Raynor to free them and allow them to join the attack on the Tal'darim.

As the terrans closed on the vault, Nyon, a Tal'darim executor, arrived aboard a mothership to bolster the defenses. The vault closed over the artifact.

The terrans destroyed the mothership, taking down Nyon with it.

Raynor's Raiders destroyed the xel'naga vault and recovered the final piece of the artifact.[1] 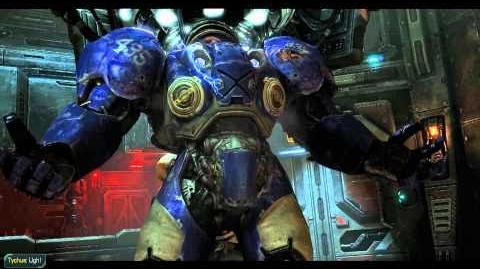 The alliance between the Raiders and the Dominion caused dissent amongst the rebels. While Raynor saw it as an alliance of convenience, some of the crew believed they had been sold out. A drunk Tychus Findlay fanned the flames by agreeing that Raynor could not be trusted. Raynor was forced into a brawl with Findlay in Hyperion's cantina. Although the fully armored ex-convict threw tables and the jukebox, Raynor won through superior agility. Raynor convinced his disgruntled crew that the zerg were just as much a threat to terran freedom as the Dominion was, and faith in his leadership was restored. Raynor then demanded that Findlay fix the jukebox.[3]

A significant portion of the map is covered by an HP-draining aura, produced by rip-field generators. Units with active plasma shields are unaffected; this favors the Tal'darim defenders. Researching bio-steel (accessed via the zerg tech tree) can be useful in offsetting the aura's damage; it won't cancel out the aura, but it will slow the effect somewhat.

Battlecruisers have the health to sortie into the aura; a fleet provides adequate firepower. Withdraw ships for repair before they are destroyed by enemy fire or by the aura. Science vessels make it easier to keep the fleet repaired in the field; SCVs are too fragile to enter the rip-fields.

When the enemy mothership arrives stay out of its range. Wait for it to near the edge of the rip-field and strike it with yamato cannons. This will cause it to retreat. Do not engage directly with battlecruisers until it is almost dead. Additionally, a squad of Vikings can prove useful to snipe the mothership and most Tal'darim air units with ease, provided they are fully upgraded (Phobos-class weapons system is a must), as their high damage output will clear the way for the slower battlecruisers. Always operate with science vessels close by, as they still are quite squishy. The mothership can teleport from place to place and will often warp-in units near its location. It will also cloak surrounding units. Destroying the mothership is not necessary, and it isn't even listed as a bonus objective, but winning the mission without defeating it is difficult but not impossible.

Enemy attacks will escalate to carriers and colossi. Both outmatch bunkers and marines, and the former may attack out of range of missile turrets. Reinforce the defenses with siege tanks and air units.

Starcraft 2 Maw Of The Void - BRUTAL Guide - All Achievements!
Add a photo to this gallery

The achievements of this mission appear to reference the He-Man franchise.

Maw of the Void uses the same splash screen as In Utter Darkness.

The worldship shown on the mission briefing can be found on the map editor on the file directory Assets>Portraits>Terran>BriefingPortrait_TTychus05.m3. Search via visualizer. Better to set camera for "%MODEL%: Star2Camera01".[4]

Retrieved from "https://starcraft.fandom.com/wiki/Maw_of_the_Void?oldid=380254"
Community content is available under CC-BY-SA unless otherwise noted.