Finding that the adjutant they got during a train robbery on Tarsonis[1] contained information regarding Mengsk's war crimes,[2] the Raiders decided to publicly broadcast them from the UNN Studios on Korhal. The rebels used the Odin, an experimental Terran Dominion siege walker, to infiltrate the planet; the walker was due to be unveiled to the public and it was hijacked by the rebels while still at Valhalla.[3]

The Raiders needed to secure three broadcast towers long enough to ensure a complete transmission. The Odin, piloted by Tychus Findlay, was received by an unsuspecting Dominion. Findlay's attack caught security forces off guard. By the time the Dominion recovered, the Raiders had established a forward base and the first rebel thors were deployed.

Emperor Arcturus Mengsk quickly guessed the identity of the attackers once the first transmission was uploaded. He ordered General Horace Warfield to intervene, but the general's counter-attacks were unsuccessful.[4]

The broadcast caused outrage among Dominion citizens and riots against Mengsk. Even Donny Vermillion, a staunch Dominion supporter, was at a loss for words. Captain Matt Horner and Commander Jim Raynor celebrated their victory.[5][6]

For Horner, it marked the true beginning of the revolution. To commemorate the attack, Findlay took a UNN plaque and mounted it in Hyperion's cantina.[7]

The only controllable unit for the first five minutes is the Odin. During this time, there is minimal enemy resistance; most enemy units will only engage the Odin if it attacks something in their vision radius, and the placement of enemies means the Odin will usually only engage two or three enemy units at a time. Use the Odin to cripple the enemy bases in preparation for the second part of the mission.

The northeast base is closest and will build primarily siege tanks, goliaths and other factory units, and should be destroyed first. The south-east base specializes in anti-infantry units (reapers, ghosts, vultures and hellions). The north-west base specializes in air units (Banshees, and Vikings, plus battlecruisers and Wraiths on brutal difficulty.) The northwest base is the better target, as its units are more powerful, and during the main body of the mission the Odin can assault the south-east base and easily destroy the fragile units guarding it. Focus on unit production structures; to conserve time damage structures only enough to get them burning, and then move on and leave them to burn down. Destroy SCVs that attempt to make repairs.

There are two smaller bases directly to the north and east of the Raiders' base; destroying these opens up potential expansion spots once the timer ends. The Odin does not have to survive, though having it in the second part of the mission is a massive boon.

Once the five minutes expire, control of the Raiders' base is granted. If the Odin survives the first phase, it is transported to the base and usable as a hero. The new objective is to maintain control of each of the three broadcast towers for a certain time. When a unit is on a tower's beacon, the tower's completion bar fills. The bar does not empty when a tower is not controlled. Beginning an upload prompts one or two waves of enemy counter-attacks on the tower; the tower must be defended.

With the northeast and northwest bases crippled, attacks on the Raiders' base will come from hellions and vultures produced from the eastern base. Repair the Odin and send it with some SCVs to hold the towers at the north-west and north-east bases. Build an army to destroy the eastern base.

Another strategy is to build a thor right away. Use it, Odin, the other thor received as free reinforcement, and four or five SCVs to attack the northeast base and secure the tower there. If constantly repaired, Odin and the thors can claim all three towers by themselves. Once the path is clear, a follow-up unit can be sent forward to the beacon to make the upload. while Odin and the thors defend. This strategy is very useful when trying to get the Blitzkrieg achievement.

Before finishing the third upload, send units to the south-east corner to destroy the science facility and access the secret mission.

To win the Blitzkrieg achievement, one strategy would be to use the Odin to destroy the northern base, then after the surprise attack ends, to repair the Odin and send it against the southeastern base ASAP with SCVs following behind to repair, seizing the resource node and rushing production of Thors and extra SCVs to repair the Odin and Thors. The Thors produced can defend the main base from attack, although a bunker and a couple of Siege Tanks can help, as well as Scanner Sweep to spot attacks from ledges. After the Odin destroys the southeastern base by itself, send a couple of Thors to assist the Odin when sending the message at the third tower, as Strike Team Charlie is tougher than the other two because of its Battlecruiser. Then send the Odin alone to send a message at the second tower in the destroyed northeastern base, while sending Thors against the western base, which contains Banshees and might be difficult for the Odin to tackle by itself. Finally, the Odin and the Thors meet up in the western base and beat the mission.

At the five o'clock expansion, there is a hidden path leading to the bottom right corner of the map and a science facility. Destroy the facility and pick up the secret documents it contains. After completing the mission, the secret mission "Piercing the Shroud" will become available on Hyperion's bridge. "Piercing the Shroud" may be unlocked by replaying "Media Blitz" through the mission archives aboard Hyperion or after completing the Wings of Liberty campaign.

The achievements for this mission are named after military strategies and terms. 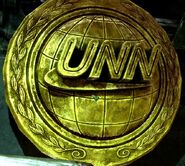