Edit
watch 02:30
Dead Cells Final DLC - The Loop
Do you like this video?
Play Sound

Medics are a campaign and Co-op Missions only unit in StarCraft II: Wings of Liberty. They are unlocked by playing the mission "The Outlaws".[1] The healing ability has a somewhat longer range than in StarCraft, allowing medics to stay behind friendly troops. Bunkered medics may also heal troops in the same bunker, allowing bunkered marines to use stimpacks more liberally.

Medics are cheaper and available earlier in the campaign than the medivac dropship. Medics are better able to keep formation with infantry, but are in turn more vulnerable to attack. Medics have a higher priority in StarCraft II than in StarCraft and are more likely to be targeted.

The medic automatically (autocast) heals friendly biological units near it with a visible animation.

Medics heal targets 25% faster and use 33% less energy per heal.

The stabilizer medpack is a new generation of medical nanobot that heals targets more efficiently and can be injected at faster rates. Show your marines that you truly care by outfitting your medics with stabilizer medpacks today![2]

Medics no longer need a tech lab to be trained.

Storing medpacks has traditionally required the advanced facilities of the tech lab. Remedius Medical Systems now offers a storage facility that can be housed in the barracks itself, eliminating the need for the tech lab when training and outfitting medics.[2]

Armor upgrades increase health of affected units by 5% per level.[3]

Medics can be used by Jim Raynor in Co-op Missions. Tychus Findlay has access to an elite outlaw medic named Lt. Nikara.

The medic automatically (autocast) heals friendly biological units near it with a visible animation.

Increases attack range of firebats and heal range of medics by 2, for a total of 4.

Early concept art for the medic depicts it equipped with a rear-mounted energy shield generator, along with a bayonet in place of its usual shield.[5]

When developing StarCraft II, Dustin Browder and David Kim wanted to go somewhere else for the terran healing role. While medics were powerful, there wasn't a lot of counterplay for the unit. Even in moderate skill levels, even picking off a single medic was difficult for players. Furthermore, medics in the original game encouraged a passive playstyle for terrans; a faction that already excelled in static defense due to their bunkers and siege tanks.[6]

In early builds, the medic was available in multiplayer before being replaced by the medivac dropship by March 2008.[7] The medics could not jump and made reapers much less useful.[8]

The medic's abilities remained largely the same as in StarCraft. Medics were produced from barracks with attached tech labs.[9] The medic's campaign-only upgrades would make them overpowered in multiplayer.[10] Development footage from 2007-2009 shows medics and medivacs using unused Heal sounds from StarCraft before eventually gaining a healing laser animation.[11]

Per the development of StarCraft II, it was decided that if a unit was being brought back from the original, something else had to be cut. In the context of that conversation, a developer pointed out that all the medic really did in the original was heal. Someone else followed up with how the dropship only transported units. David Kim had what he described as a "eureka moment" and thought about combining the two. The dropship was good for harassment in StarCraft multiplayer matches, and in that tactic, players always paired marines with medics. Thus, why not combine the units? Furthermore, the medivac would allow opponents to "read" the terran player better in multiplayer, since the dropship was more distinct than an infantry unit. Furthermore, the medivac would encourage terran players to play more aggressively.[6]

In initial development, Campbell returned to voice the medic. However, as she was replaced with Tricia Helfer as Kerrigan, she has expressed doubt as to whether the current lines are her own (at least in terms of delivery).[12] Julie Nathanson said that she recorded lines for the Medic.[13]

The Galaxy Map Editor contains a "mercenary" medic model that is unused in Wings of Liberty. The model was later used for Skibi's Angel in Left 2 Die, and then Field Response Theta in Heart of the Swarm.[14] 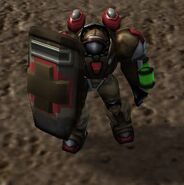