Start a Wiki
"Ready for dust off."

The medical evacuation dropship, officially designated as the G-226 medical transport[3] and called the medivac for short,[2] is a terran aerospace transport that also provides medical support for wounded troops in the battlefield.

The medivac is outfitted with a state-of-the-art medical bay[4] (supposedly the most advanced in the Koprulu sector[2]) and triage station that uses auto-sutures and laser scalpels to seal wounds and repair tissue almost as fast as it's mangled,[4] though the accuracy and precision of these tools are questioned by marines.[3] Soldiers are administered growth stimulators, nanomachines,[4] and pain suppressants[2] to keep them in the field. The machines also bond with damaged tissue, exponentially boosting its natural regenerative properties.[4] Based on the Quantradyne dropship,[3] the medivac is larger and heavier than its predecessor, due to the medical bay and triage station in the rear of the ship, as well as the array of stabilizers and gyroscopes housed in the airframe that maintain the vessel's level and orientation[4] despite heavy cargo.[2] This ship is also designed to ferry personnel and vehicles, including the massive thor, to and from combat zones with minimal fuss.[4] Despite the increases in size and weight, the medivac is actually faster than the old Quantradyne.[2] It can be flown with one or two pilots.[5]

A support ship,[6] the medivac retains the Quantradyne's rotatable engines, but unlike its predecessor, its boarding/departure ramp is at the front rather than the rear.[7] Heavy medivac losses led engineering crews to perform unsanctioned upgrades to increase engine output, namely adding injectors that pump oxygen-rich fuel into the exhaust stream. The first attempts, while successful at getting medivacs out of fire zones, resulted in heavy stress-induced damage to the turbines and, in rare cases, to the ship's airframe. When questioned, neither the engineering crews nor soldiers revealed who was responsible for the changes. Dominion officers determined that it was cheaper to upgrade their whole medivac fleet than to discipline an entire troop company.[4]

The ship is also equipped with a gravity tube for rapid loading and unloading of single units.[2]

While uncommon, some mercenaries use customized medevac dropships when missions involve important enough personnel. Private militias such as the Knights of Tyrador utilized well trained medivac pilots, though mostly for rescuing wealthy tourists in yacht crashes.[8]

Dropships filling the role of a medical evacuation ship and referred to as "medivacs" predate the Great War, and were utilized by the Terran Confederacy.[9]

The modern medivac concept was first introduced as an improvised solution by the Terran Dominion's 19th Marine Division. The unit was operating in the acid storms of Thalon VII, and modifying a Quantradyne dropship to allow for remote control increased the combat life of medics by decaminutes.[3]

The official adoption of medivacs was carried out by the Dominion Armed Forces. A Dominion post-Brood War analysis found a startling thirty-seven percent of field-deployed troops became casualties requiring evacuation to the rear. In light of these findings, Emperor Arcturus Mengsk personally ordered Quantradynes redesigned to produce the medivac transport. The redesigned dropship served as a forward triage station and kept units in the field longer, regardless of injury.[10] However, the medivac is very expensive to deploy,[11] and the deployment cost of a medivac is equivalent to the expenditure of a small colony town. Because of this, the Dominion still trains traditional field medics.[4]

As part of the redesign, expedient deployment of vehicles and personnel (especially under fire) became a top priority in the dropship redesign. Due to budget constraints, Dominion engineers settled on a single gravity tube that reduced loading and unloading speeds to one tenth of a second, but could only deploy soldiers or machines individually.[4] The tube was developed by Bellerephon,[12] while Procyon Industries won the contract to provide the G-226's laser scalpels and auto-sutures by being the lowest bidder.[3] By the Second Great War, a healing AI had been developed for the medivac, allowing it to acquire and heal two targets simultaneously.[12]

The success of the medivac design caused the Umojan Protectorate and Kel-Morian Combine to adopt them as well.[10] The extensive medical training of Umojan medivac pilots has been credited for the longer than average soldier lifespan in the Protectorate.[8]

During the Second Great War, when the zerg attacked the main research campus of the Moebius Foundation on Tyrador VIII, Doctor Emil Narud gave Commander Jim Raynor control of their medivacs so that he could use them to transport his men around the city and avoid most of the zerg.[13]

After a covert operation resulted in heavy casualties among the Dominion Special Forces, the Dominion authorized a greater use of medevac dropships for their specialists.[8]

Medivacs appear in StarCraft II, dropping units quickly one at a time.[14] There is a delay between every dropped unit.[15][16] Transports have a drop animation which doesn't affect gameplay, although it will be more vulnerable as it will not automatically move away if attacked.[17]

The medivac dropship picks units up extremely quickly, fast enough to enable units to dodge stalker attacks.[14][15] The medivac dropship can transport a thor. The thor transforms into a cube and hangs underneath. This fills up the entire capacity of the dropship.

Medivac dropships make great support to marines, especially those bolstered by M98 ballistic alloy combat shields, which enables them to survive a hit from a high damage unit, after which they can be quickly healed.[18] Against the zerg, medivacs work well with marauders as part of a "commando force."[19]

The unit was voiced by Lani Minella.[20]

Decreases the cooldown of Ignite Afterburners from 8.57 to 6.43, and increase the Medivac's base movement speed from 3.5 to 4.13

The medivac dropship heals a friendly biological unit nearby it.

Can be set to autocast. May only be cast on one unit as a time, and may not be stacked by multiple medivacs.

The ability does not "stack" with a roach's fast healing rate.[21]

Medivac dropships cannot heal units inside of them.

The medivac dropship gains a speed and acceleration boost to 5.94 for 6 seconds (9 seconds with the High Capacity Fuel Tanks upgrade).

This was added in Heart of the Swarm.

When using medivacs, their usage should be weighed against the hercules dropship. The hercules can carry as many troops as four medivacs for a bit more than the cost of two, and is much more durable, but the medivac has a major advantage in its ability to use a reactor to build two at a time, and builds in just over half the time of the hercules. If the player needs to transport small strike teams, the medivac is preferable, but when dealing with larger armies, the hercules is preferable. The need for healing is a moot point if the player goes with an all mechanical force, in which case the hercules is universally superior to the medivac.

Dropping troops onto a hostile battlefield is always dangerous, but a slow drop can be lethal. Bellerephon has made this problem a thing of the past be developing a new gravity tube that can deploy the medivac's contents almost instantly.[12]

Medivacs can heal two targets at once.

This new healing AI enables the medivac to acquire and heal two targets simultaneously, allowing the medivac to expend its energy faster keeping troops alive and in fighting condition. Never again will you be saddened by the sight of a squad of dead marines and a live medivac with half its energy reserves.[12]

Damaged mechanical units recover hit points when out of combat, at a rate of 0.6015 each second.[22]

Armor upgrades increase health of affected units by 5% per level.[23]

Tychus can deploy medivacs as a calldown from the medivac platform in Co-op Missions.[24]

Mengsk can deploy specialized medivacs named imperial intercessors. These have the ability to carry Shock Division siege tanks, and can be upgraded to have the tank fire while being carried.[25]

The medivac dropship was designed to replace medics. Medics could not keep up with reapers, which discouraged the latter's use in favor of the medic/marine combination. The medivac dropship allowed for more flexibility.[26] The idea for the medivac come from David Kim; in a meeting, a developer pointed out that medics could only heal in the original StarCraft, while another pointed out that dropships could only transport. Thus, Kim decided to combine the two units. After all, the original dropship was good for harassment, but players would always load marines with medics regardless. Likewise, the medivac would allow players to better read their terran opponents in multiplayer, while the medic was a more indistinct infantry unit. The medivac would also give terran players an incentive to play more aggressively.[27]

The medivac had two upgrades that are not present in the final version of the StarCraft II: Wings of Liberty campaign but are available in the map editor; Expanded Hull and Auxiliary Med-Bots. The two upgrades increased the cargo space of the medivac and healing rate respectively.[28]

In Heart of the Swarm, medivacs gained the Caduceus Reactor upgrade at the tech lab, which reduced healing cost.[29][30] The enhanced healing beam will change color.[31] A fusion core is required for the upgrade.[32] The upgrade was later reverted to the Wings of Liberty version via the January 9, 2013 balance update.[29]

Increases the starting energy of the medivac dropship by 25.

This upgrade is removed in Legacy of the Void.[33]

The medivac appears in Heroes of the Storm, as a transport summoned by Rosa Morales.[34] 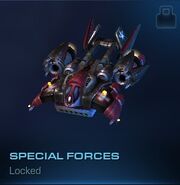 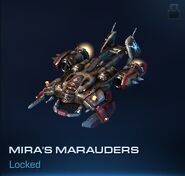 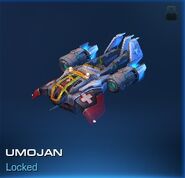 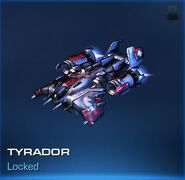 Tyrador medivac
Add a photo to this gallery

Tyrador medivac portrait
Add a photo to this gallery

Retrieved from "https://starcraft.fandom.com/wiki/Medivac_dropship?oldid=357299"
Community content is available under CC-BY-SA unless otherwise noted.