He was born in Hawaii in 1971. He has worked for numerous comic publishing companies and is most known for his comic book adaptation of George R. R. Martin's Hedge Knight series.

Mike Miller contributed to the artwork of StarCraft: Issue 6.[1]

He was the primary illustrator of StarCraft comic issues 8[2] and 9[3] which have since been canceled.[4] 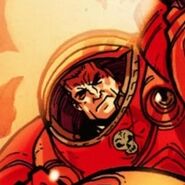 Retrieved from "https://starcraft.fandom.com/wiki/Mike_S._Miller?oldid=169125"
Community content is available under CC-BY-SA unless otherwise noted.