The monolith is a structure. During the development of StarCraft II: Wings of Liberty, it was called the dark pylon,[4][5] then the obelisk.[6] The name "obelisk" was given to another building.

Proton Charge redirects here. You may be looking for the terran device.

The monolith was a Dark Templar structure.[6]

The obelisk was conceived as a result of StarCraft II's unlimited selection. The downside to unlimited selection was its interference with micro-management. Early playtests resulted in little base management and massive armies being built up and attack-moved across the map.[7] Over the course of its development the obelisk was a support structure, formerly known as the dark pylon.[4][5] However, the dark pylon became a separate structure called the monolith, which was canceled.

As the dark pylon, the monolith was similar to a pylon. It provided psi and power to protoss buildings like the pylon, but also has special abilities.[3] However, Blizzard was not entirely happy with the dark pylon in February 2009, as they felt this Null Shield was uncompetitive.[8] Early versions of the dark pylon cloaked surrounding structures.[9] Its purpose was to hide a protoss player's tech tree and cloak photon cannons until they began firing, but it was removed from the multiplayer game as it wasn't useful enough.[10]

The Dark Templar were set to have more defensive structures as of March 2008.[9]

The monolith was removed from multiplayer in February 2010.[6]

No research was required to acquire the monolith's abilities.[11]

The monolith no longer has a cloaking ability.[4]

As of February 2010, the monolith lost Argus Link and Proton Charge[13] and was canceled.[6] 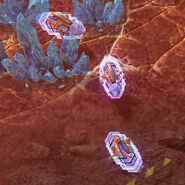 Probes affected by proton charge
Add a photo to this gallery

An area of effect ability[2] which allows a group of probes to gather one more mineral per trip[16] for a short time by enhancing their proton-cutters.[3] Proton Charge only directly enhances their ability to harvest minerals.[2] The duration doesn't stack when used multiple times, but casting it again will renew the duration.[15]

Proton Charge can be cast on the minimap.[17]

Retrieved from "https://starcraft.fandom.com/wiki/Monolith/Development?oldid=269108"
Community content is available under CC-BY-SA unless otherwise noted.