View source
watch 02:46
The Quarry - The Loop
Do you like this video?
Play Sound
"These guys are immensely capable, and a rare sight to behold indeed!"

- Radio Liberty on the core.(src)

The mothership core is a protoss unit built from the nexus. It provides support abilities and only one core can be built per player.

It was removed from multiplayer in Patch 4.0.

While an invaluable part of the protoss arsenal, motherships are costly and time-consuming to produce. As a result, the protoss have begun constructing them in two stages, with the mothership core being the first step. The core itself is used as a defensive and support weapon until a mothership can be completed.[1] They share a strong psionic link with the khaydarin crystals located in every nexus.[2] The core is also equipped with a barrier that, when it is surrounded by the mothership's hull, is used to keep the crew on the rest of the ship safe from the powerful energies it generates.[3]

It is rare to see mothership cores on the battlefield.[4]

Mothership cores are equipped with a repulsor cannon, which draws its energy from the khaydarin crystal located at the heart of the core. It fires a blast of semi-solid psionic energy (too dense for aerial combat) that causes damage by delivering kinetic and thermal energy. Each shot pierces matter violently, leaving a misty cloud of psionic fire in its wake. Additionally, the core can channel psionic power into the khaydarin crystal located within a nexus, turning it into a deadly weapon. In this state, the supercharged matrix fires psionically imbued photon bolts that can tear through enemy scouts and light raiding parties, as well as deter larger attack groups until reinforcements can be warped in.

The core can bend space-time to create a field where the present dilates and stretches endlessly. The unpredictable energy flux within this field bears down heavily on anything that crosses it. Enemy forces caught in this time warp are slowed to a crawl, allowing protoss forces to dispatch them with ease. They can also use a nexus's khaydarin crystals as a warp beacon—releasing a large amount of energy, a mothership core can unravel the weave of space-time, teleporting groups of warriors to any nexus point in the vicinity (this is a form of recall).[2]

The Mothership Core was removed from multiplayer in Patch 4.0.

A player may only have 1 mothership core at a time
The mothership core is available to players very early in the game and it is highly recommended that they build one in this stage.[5]

The mothership core is ill-suited for late-game, due to its fragility.[6]

Its unit portrait is the same as that of the standard mothership. It likewise speaks with a female voice.

In Heart of the Swarm, the mothership core uses this ability on a nexus, which gains a photon cannon-like weapon. The weapon has range 13, targets air and ground and deals 20 damage. The weapon lasts 60 seconds and has its own cooldown of 1.25.

In Legacy of the Void, this ability is cast on pylons, dealing 30 damage[7] with a cooldown of .71 seconds.[8] 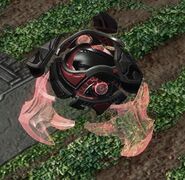 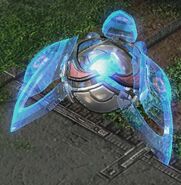 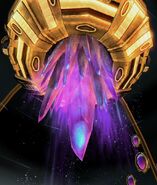